UF rises again in U.S. News & World Report rankings, this year to No. 6 among public universities 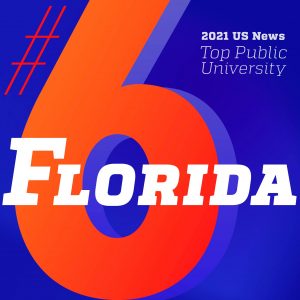 For the fourth year in a row, the University of Florida has risen in the U.S. News & World Report Top Public Schools rankings, climbing to No. 6. UF once again remains the most highly ranked university in Florida and the only university in the state in the top 10.

The top 10 public universities are:

U.S. News published the first-ever national ranking of undergraduate computer science programs this year, with UF ranking in the top 10% at No. 48 out of 481 public and private programs.

The recognitions by U.S. News come on the heels of a banner year for the university, which broke records on research expenditures and awards and launched a ground-breaking artificial intelligence, or AI, initiative that will set the university apart nationally. UF’s AI initiative is anchored by a $50 million gift from UF alumnus Chris Malachowsky and technology company NVIDIA and will integrate artificial intelligence across academic and research disciplines, fueling an AI-enabled workforce.

You can read the full update here.