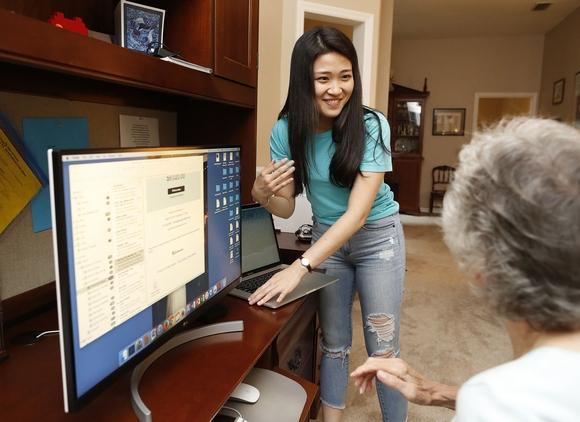 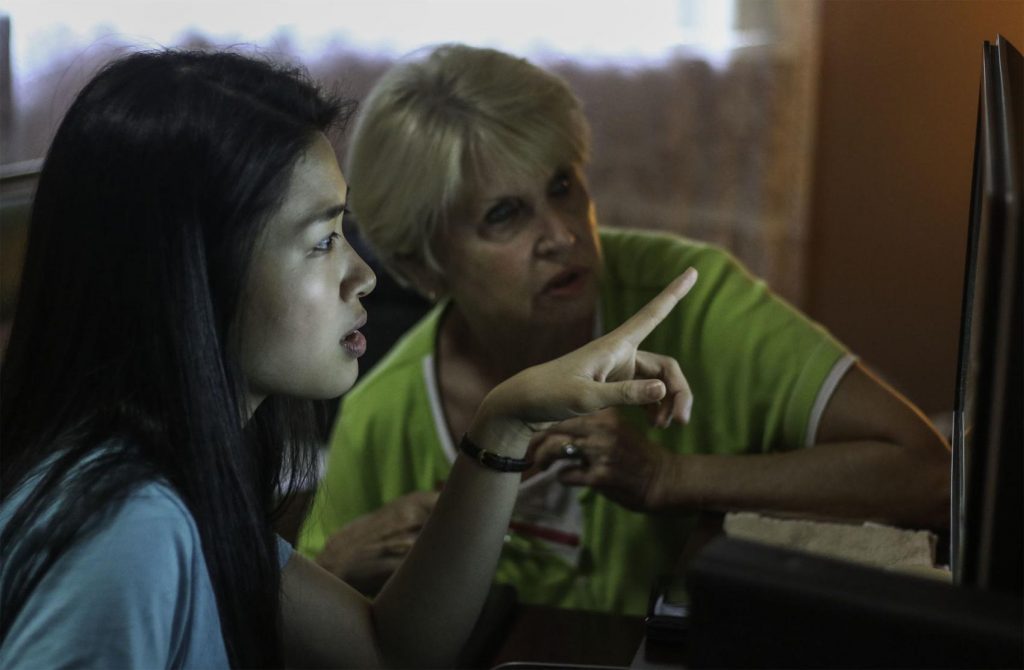 Ming Yang, the 24-year-old CEO and founder of Orchard, shows B.J. Summerlin, a 76-year-old retired nurse, how Yang fixed her computer from turning on by itself in the evenings. Summerlin said the company brings a great value because she feels comfortable with them coming into her home and patiently teaching her. “I feel like I’ve rented a grandchild,” Summerlin said.

This article is written by Priya Dames and originally published in The Independent Florida Alligator.

“It’s like I’ve got a grandchild that I can rent to fix my computer,” B.J. Summerlin said, laughing.

Summerlin found Orchard in the summer of 2018 when her computer began to malfunction. She said she tried other technology repair companies in Gainesville but found the service mediocre. Orchard was refreshing, she said, because Techies were not condescending or aloof.

“So many older people feel intimidated by tech employees,” Summerlin said. “It’s never been that way with Ming.”

UF graduate Ming Yang, 24, is the CEO and founder of Orchard, a technology repair company with an emphasis on hospitality and teaching.

Orchard strives to repair devices while teaching its target clients — seniors — about technology.

According to Yang, Orchard employees, or “Techies,” build symbiotic relationships with their customers. Techies gain as much knowledge from their wiser clients about life, relationships and career choices as their clients gain from them about the latest devices.

“Sometimes even saying [the word] customers is weird,” Yang said. “It feels more personal than that.”

“Sometimes even saying [the word] customers is weird, it feels more personal than that.”

During her time at UF, Yang set herself apart from her cohorts continuously. Using a connection she made at an internship with Microsoft in the summer of her sophomore year, Yang founded the WECE Maker Garage, a workspace housing $13,000 worth of computer hardware and electronics Microsoft donated to enhance computer and electrical engineering learning at UF.

Although Yang’s success at UF came from hard work, she said her idea for Orchard came from more humbling experiences.

Yang supports her mother and grandmother, who speak limited English, by handling bills, government documents and taxes. Yang’s mother was diagnosed with thyroid cancer and previously relied on Medicaid for her healthcare in Yang’s youth.

During Yang’s undergraduate career, her family lost Medicaid. To acquire support for her mother, Yang drove from Gainesville to her hometown of Fort Lauderdale nearly every weekend to help her mother apply for Social Security Disability Insurance.

Due to her constant commute and demanding course load, Yang’s grades suffered, and she said she thought the situation could have been avoided if her mother had more technological literacy.

“I later reflected and thought that maybe if she had known how to use email or video chat, I could’ve helped her do the in-person interview with video chat or help her sign papers and send it to her via email,” Yang said.

“They’re for repairing computers, not helping people. They wouldn’t have the patience to explain to her what is going on. They’re not built for an older generation,” Yang said. “So when I realized that I thought, ‘I’ll just do it myself.’”

“They’re for repairing computers, not helping people. So when I realized that I thought, ‘I’ll just do it myself.’”

Yang said she spent her sophomore year building Orchard with a group of three friends. After that year was finished, however, Yang decided to disband the group due to differences in the creative vision.

“Telling three other people that everything we’ve worked for as a team will be scrapped is hard,” Yang said. “It was probably the toughest conversation I have ever had to have with a group of people.”

So, Yang shelved the idea away.

With her graduation quickly approaching, Yang grappled with which career path she would pursue. She decided to set her sights on graduate school, conducting research in Human-Computer Interaction at UF and working as a Siri Design Intern at Apple in the summer of her junior year.

But she couldn’t get the idea of Orchard out of her head. It was during her stint at Apple that Yang finally received the advice she needed from a mentor.

“He told me, ‘Whenever we make big decisions in life, things that are ambiguous where both choices can be the right choice, we either make it out of insecurity or courage and love. Whichever decision we make, that emotion will just continue to grow,’” Yang said. “When I heard that I realized that the reason why I wanted to go to graduate school was deep down inside, I felt maybe I wasn’t good enough. Maybe I needed a PhD to prove that I was smart enough.”

"I realized that the reason why I wanted to go to graduate school was deep down inside, I felt maybe I wasn’t good enough. Maybe I needed a PhD to prove that I was smart enough.”

Yang decided to start the  company despite what others said about her age. She met with Director of the Engineering Innovation Institute Erik Sander, who would provide the funding needed to kickstart Orchard and run a pilot of the company in the summer of 2018.

Yang launched Orchard officially in August 2018 and has been operating as CEO ever since.

In April 2019, Orchard received its investment from Yang’s former mentor and Vice President of Notes and Tasks at Microsoft, Laura Butler.

Yang hopes Orchard will draw attention to the needs of seniors through a diverse team of employees.

The company has a core team of four students studying a range of engineering disciplines at UF. These students work to develop operation processes, web applications and recruiting new employees.

Summerlin has had five sessions with various Techies and continues to build confidence in her technology knowledge.

The Techies are contract workers who have backgrounds in management information systems, computer science and even psychology. Yang encourages students of all backgrounds to apply.

She offers a piece of advice to students looking to find their niche in the world.

“What I found to be most useful is separating what we do from the effects of what we do,” Ming said.