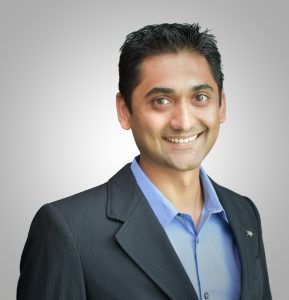 Kaustubh Kale is a remarkable example of an international student who came from India to study for a Master’s Degree at UF on a full scholarship, then stayed on in Florida to start up his own company that is now well on a path to boost the state’s economy with new investment capital and new high-tech jobs.

After finishing double Master’s degrees – one in electrical and computer engineering (ECE) and another in management – Kale moved to South Florida to work for Motorola’s cell phone division. As he mastered the nuances of source separation and localization technology, he began to think of many other applications for this technology besides cell phones. Based on discussions with his wife, a resident physician at the University of Miami, and his father, a successful entrepreneur in India, Kale developed a method of using microsensors for cardiac assessment. “My excellent education in India, my Gainesville days, my experience at Motorola, my experience with grant funding, and my wife’s medical career all culminated in the birth of my medical device company,” Kale said.

In 2013, Kale became the founder and CEO of Aventusoft, LLC, based in Boca Raton, Florida. He has secured eight million dollars of federal funding towards research and innovation, which has created the opportunity for administrative and high-tech employment in the local area. He and his team are working on revolutionary technology to improve access and reduce costs in cardiovascular health. They aim to have significant impact locally and nationally.

Kale has won the Attributes of a Gator Engineer Award for Leadership along with multiple national 40 Under 40 awards. “It has been an honor to receive recognitions on national platforms, as I continue to thrive in South Florida. I have put down my roots here; I have built a family, a career, a medical device company and a community here.  I plan to stay, grow and keep giving back to this community,” Kale said.

Kale formed some invaluable professional relationships at UF, which he still respects and fosters today. He reaches out to his graduate program advisor, Dr. John Harris, the chair of the Department of Electrical and Computer Engineering, from time to time, for advice and feedback. Kale returns to Gainesville when he is in search of talented engineers to work with his company.

Kale says, “In Gainesville I made friendships that would last a lifetime; and even now, whenever I bring my family to visit my alma mater, I am filled with pride and a sense of belonging. After all, this is where my journey in the United States began.”

Engineering Dean Cammy Abernathy praised Kale’s creativity, innovation and leadership. “Kaustubh exemplifies the high-achieving international students who add so much strength to our university and our economy,” she said. “We are proud that the excellent engineering education he received helped steer him forward in his stellar startup career that is also making a big impact on the State. And we are always delighted to welcome him back on campus with his family.”