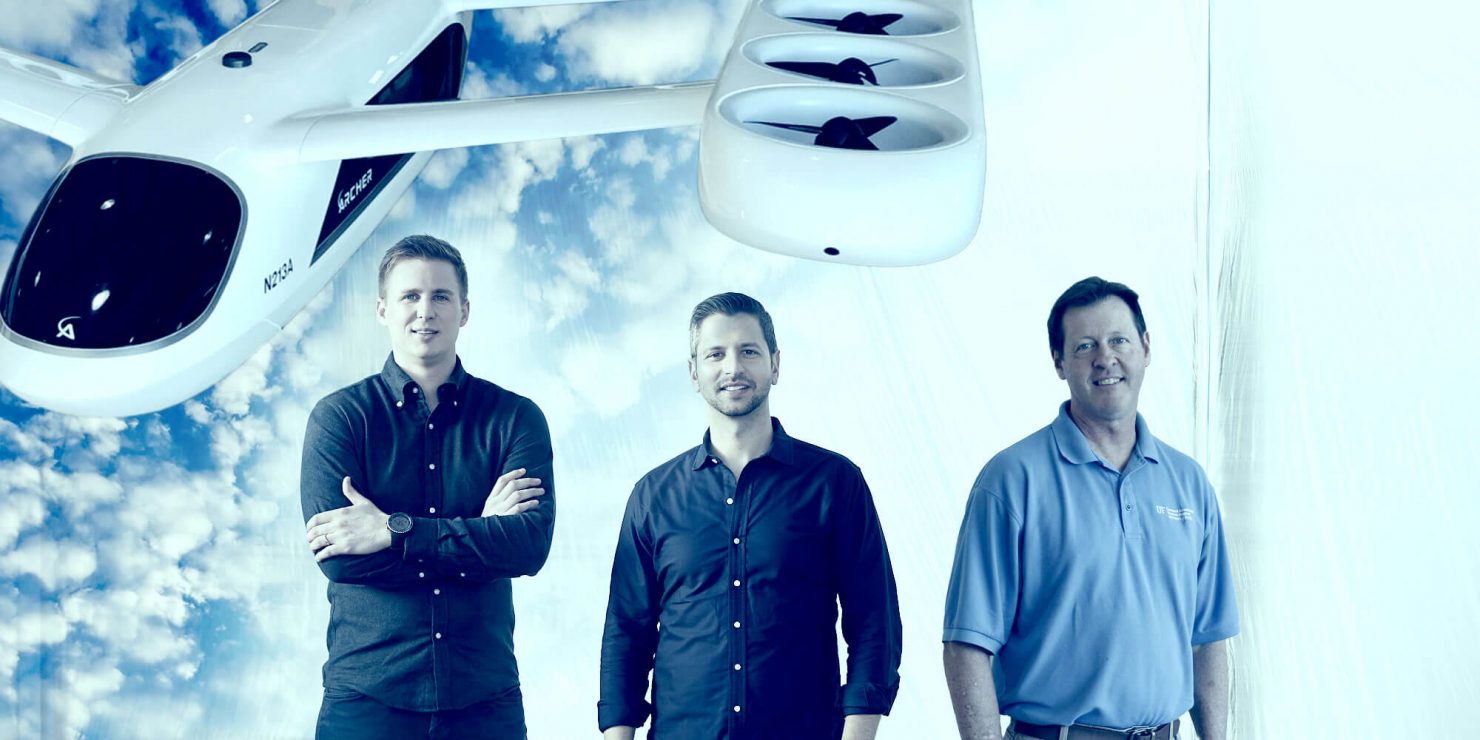 As successful serial entrepreneurs, Adam Goldstein (UF BSBA ’01) and Brett Adcock (UF BSBA ’08) are always looking for the next big thing to bring to market. EVTOLs, short for electric vertical take-off-and-landing vehicles, had a compelling appeal, but there were challenges. A sector seated by large aerospace companies, staggering start-up costs and, most importantly, a new space that imposes many technology challenges, the eVTOL industry would deter any seasoned entrepreneur from entering. Yet, a chance meeting with a fellow Gator at a conference turned out to become the beginning of an adventure that could get flying taxis into the air.

While attending an American Institute of Aeronautics and Astronautics (AIAA) conference in early 2018, Adcock met Moses Divaker, a Ph.D. Student in the Department of Mechanical & Aerospace Engineering (MAE) at UF Herbert Wertheim College of Engineering, where they were both sitting in on a seminar about the engineering and design of eVTOL aircraft.

After successfully founding, running and then selling an online marketplace company, Vettery, for an impressive gain, Adcock and Goldstein identified urban air mobility as a new target that could provide a promising return. Adcock had come to the AIAA conference to learn more about aircraft engineering design and to meet the top engineering talent in the eVTOL space to see if he could interest them in forming a team to pursue his and Goldstein’s vision for an urban air mobility company to serve intra-city transportation needs. A chance meeting in the hallway of the conference got Divaker and Adcock talking — and talking. They parted with a shared sense of excitement and a mutual commitment by Divaker and Adcock to work together to develop an eVTOL aircraft design concept that would meet Adcock’s business needs.

“I have wanted to design ‘flying cars’ from the time I was a young boy,” Divaker said. In his Ph.D. program at UF, he was able to work under Dr. Peter Ifju, a professor and associate chair of Faculty Affairs in MAE. “He is highly experienced with and has been successful in developing the core technology that powers small-scale electric aircraft, mostly in the form of drones. The long-term goal of my Ph.D. research is to take that small-aircraft experience and follow a trajectory that could translate it into electrically-powered, larger aircraft.”

Divaker began sending weekly reports to his two fellow Gators, showing his designs and adroitly responding to their questions and feedback. Meanwhile, designs from other institutions were also being considered by Adcock and Goldstein as they prepared to enter the next phase of their plans, building prototypes from the most promising designs. He knew that his mentor, Dr. Peter Ifju, and his team of MAE students at UF had superior skills at rapid prototyping*; so, during a visit to New York, where he met with the duo for an in-person update, he introduced them to Dr. Ifju through a phone conversation.

Divaker explained, “They (Adcock and Goldstein) had been in discussions with other university partners as well, but they were really impressed by our in-house capabilities when we showed them video of an unmanned electric hydrofoil we built here at UF, and by what UF engineering could do.” Through subsequent meetings with Dr. Ifju and UF, Adcock and Goldstein reached an agreement to work with Dr. Ifju and his team, including Divaker, on the eVTOL prototyping.

The first prototype that inspired a company name

At this point, the two entrepreneurs informally named their future company Archer Aviation after Dr. Ifju’s lab they were funding located on Archer Road, a major thoroughfare in Gainesville, the beloved home of the Gators. “I know they originally picked the name because of its personal symbolism of their connection to UF,” Divaker said, “but, when they later hired a marketing firm to do a formal study and come up with the best name for their venture, Archer still came out on top of all other suggestions; so, they stuck with it.”

The UF legacy is further fueled by Ifju’s solid design-and-build reputation. “We started out with the designs – the on-paper concepts everyone had come up with,” Ifju said. “At that point, Brett and Adam were impressed with the idea of distributed electric propulsion, so we started designing eVTOL aircraft that were capable of hovering for vertical takeoff and landing but able to fly on a high aspect ratio wing to generate high energy efficiencies.”

Dr. Ifju explained, “They gave us some initial funding and asked us to come up with a fully functional small prototype within four months. By December of 2018, our team had built a model that was 42 inches long by 42 inches wide and weighed about 15-20 pounds. We flight-tested it for them in late December 2018, and they were quite pleased with the results.” 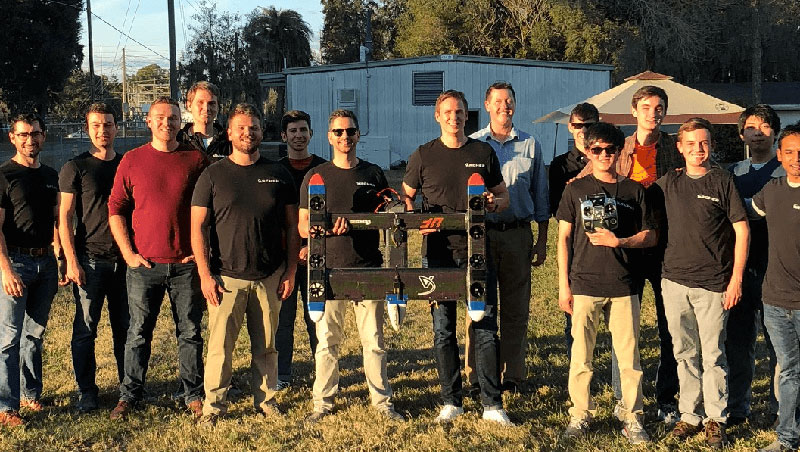 The first UF prototype of the eVTOL aircraft from Archer Aviation

At this point, Archer Aviation decided to increase their involvement with the research lab and worked to build larger scale eVTOL aircraft to tackle the company’s roadmap. “We basically beat out the competition, because our designs were very good; but mostly, we had the ability to build and flight test things way more efficiently than anybody else,” Dr. Ifju said. Divaker added, “Rapid prototyping is so important when you are looking to bring all the components of a new aircraft together. Sometimes you must be able to change the design very quickly to determine the optimal configuration, and this is an area where Dr. Ifju excels.” 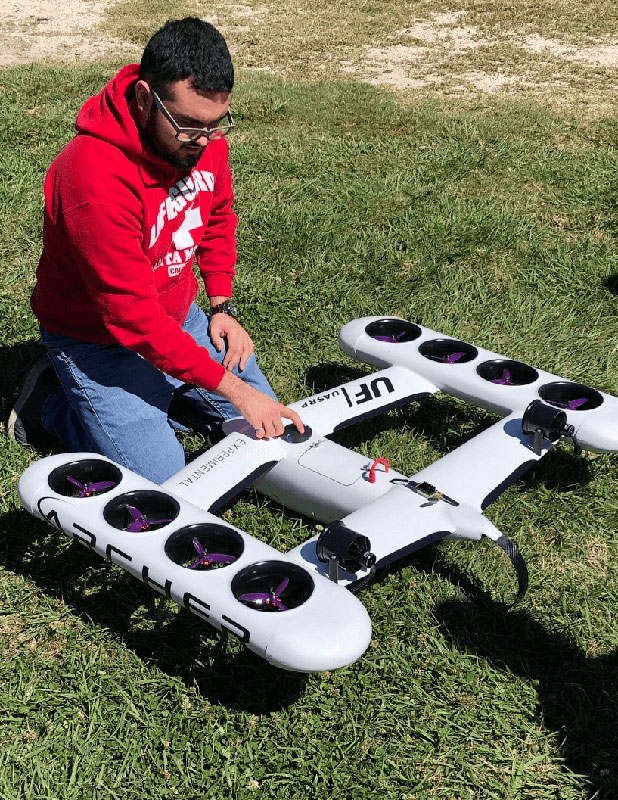 The demonstrated speed and design excellence of Ifju’s rapid prototyping prowess propelled them further forward. Archer Aviation continued funding the UF team, this time with a more visually attractive and more realistic prototype built to advance the company’s roadmap and to attract early investors. At the same time, UF students were hired directly, and people from other industries were brought to the UF campus to work on the project under Ifju. Over the next couple of months, Dr. Ifju’s team completed the second eVTOL prototype and flight testing began.

Dr. Ifju proposed and built a subsequent full-scale mock-up of a two-seater eVTOL aircraft that was 20 feet long, 20 feet wide and 8 feet tall that weighed in around 1600 pounds. It proved to be a big hit.

In April 2019, when Adcock and Goldstein came for a review meeting, they got much more than they were expecting. First, they got to see a test flight of the new, refined prototype. “We followed FAA protocols, so we didn’t fly the prototype any higher than 100 feet, but we had it take off, fly in circles and land right where we wanted it to land,” Ifju said. Then, the UF team unveiled the full-scale mock-up, and it was clear at this point that Adcock and Goldstein were very excited about the project’s progress and prospects for their future business plans.

Adding autonomy for the future 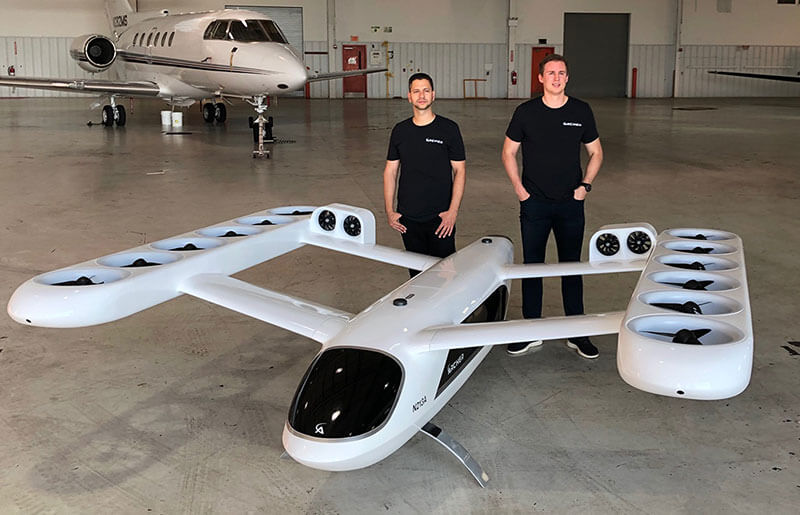 With additional funding, they next set out to design a fully functional half-scale prototype, 10 feet x 10 feet and weighing approximately 250 pounds. As part of their concept, Ifju’s team included the capability of flying autonomously in addition to being remotely operated. “It had GPS, inertial measurement units, accelerometers, gyros, air speed sensors, altimeters and more – basically all the technology we employ in drones now housed in the larger footprint of our eVTOL,” Dr. Ifju said.

Even more remarkable was that the half-scale model was built in just 90 days, over the summer of 2019. It included a carbon-fiber air frame, full drone sensor technology, and with a sleek, futuristic surface coating. Meeting a very aggressive time demand, the team was ready for a test flight by September, which took place at the UF Institute of Food and Agricultural Sciences (IFAS) Plant Science Research and Education Unit (PSREU) in Citra, Florida with great results.

At this point, Archer Aviation had established its headquarters in Santa Clara, California. With a commercial-focused, go-to-market strategy, Archer Aviation would be the first to successfully introduce eVTOLs to the urban air mobility space. Adcock and Goldstein’s initial reservations about eVOTL as a startup were completely behind them now. Along with Archer Aviation, they capitalized on their promising trajectory by funding a new engineering facility called the Archer Aviation eVTOL Lab on the outskirts of the University of Florida campus. The lab provides a larger dedicated facility for research and development of future eVTOL enabling technologies in a university setting.  A formal building dedication is scheduled to take place on November 5th.

“Fortunately, one of Archer’s new hires was Kyuho Lee, a former student of mine who lives in Gainesville and is an expert in composites and prototyping,” Ifju said. “He had a full machine shop at his house, so Archer utilized him to help deliver prototypes. He delivered on time and under budget, even with COVID.”

While the prototype was taking shape at Lee’s home, Dr. Ifju built a full-scale mock-up of the cabin fuselage to test ingress and egress, and every other consequential creature-comfort at the interior to be sure that it was proportionate and comfortable. “Passenger comfort is one of the most important factors in designing a passenger vehicle,” Divaker explained.

The UF team has built a total of five prototypes and two mock-ups to prove that the core technology behind electric propulsion and drones could be scaled up to full-size eVTOL aircraft. Today, Dr. Ifju’s MAE team are utilizing the new engineering facility to research aeroacoustics of the propeller blades to provide Archer Aviation’s eVTOL aircraft with the quietest ride available.

Flying forward into the future

There is a lot more work to be done, and Dr. Ifju says his team will support that work whenever they’re called upon. “Research is the necessary and vital role of academic institutions, and I am incredibly proud of the research that comes out of the UF MAE department,” he said. “What we are able to do with Archer is by no means serendipity alone. It comes from the long and proven tradition of UF research excellence in aerospace, and our engineering students’ unique aspiration and work ethic that lets us help Archer take off. When air taxis are a reality, I’ll be riding in them.”

As for Moses Divaker, he completed his Ph.D. in May 2021, fully funded by Archer Aviation. He formally joined the company in Palo Alto upon graduation. “I’m continuing my dream to make the crazy idea of flying cars a reality.” He concluded, “I am a licensed pilot, and I would love to fly an eVTOL aircraft. When they become completely autonomous, do I want to be one of the first people to ride in one? Yes, definitely, sign me up!”

Archer Aviation continues with their confident plans to bring eVTOLs to market as quickly as possible. The company has signed contracts with the cities of Los Angeles and Miami to introduce an aerial ride sharing network by 2024. Archer also has a $1 billion order from United Airlines, with volume manufacturing of eVOTLs planned to begin in 2023.

As air taxis become a reality in the near future and Archer Aviation accelerating toward its goal, it’s clear that UF graduates and students continue to be part of a critical cornerstone for both Archer and the industry as a whole.