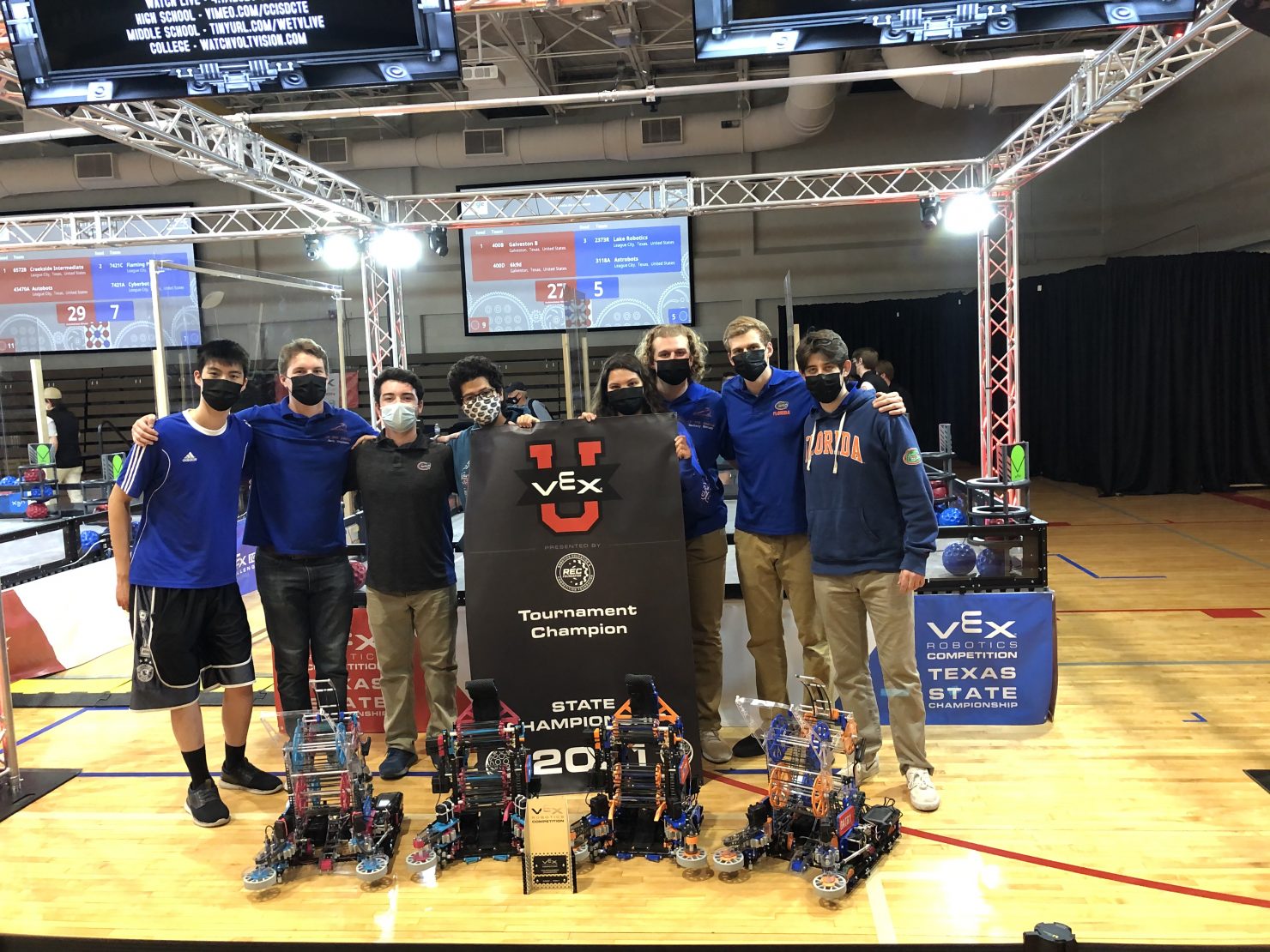 Each year, 300 university-level teams from more than 50 countries compete in qualifiers as they head towards the Vex Robotics World Championships. Cameron Soviero, Captain of the Gator VEX Robotics team, has reported in on the UF team’s recent win that puts them in a top spot.

“This past weekend, with the help of numerous UF faculty and students, the two GATR VexU teams were able to compete at the most competitive event of the year. The Texas Qualifier hosted teams from the University of Florida, University of Central Florida, Florida Polytechnic, Texas A&M, LSU, South Dakota, Oklahoma, Palo Alto, Austin College, University of Tennessee and many more. After qualifying for the World Championship last month, this competition was only open to teams who had qualified for the World Championship. Some of the best teams in the country were in attendance.

The UF Vex team has a multitude of team members, so we were able to bring both of our affiliate teams (GATR1 and GATR2) to the competition. By having two teams under one organization, we can include all our team members in the full engineering design process and allow all members (old and new) to participate fully. While we were only able to bring a limited number of members to the competition due to COVID-19 restrictions, we had an overwhelmingly positive and rewarding experience!

After qualification matches, GATR1 and GATR2 placed 4th and 2nd respectively, out of a total of 14 teams at the event. This was on par with our expectations, and our increased levels of success were carried on to the elimination matches that followed. Both GATR1 and GATR2 won their respective round of 16 matches by large margins. 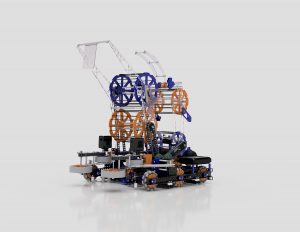 Unfortunately, our GATR1 team got disqualified after the quarterfinals match due to an autonomous malfunction that resulted in a 20-minute rules discussion with match officials. We are still disappointed with the interpretation of the rules that was applied to our team; however, this did not slow down our second team, GATR2, from moving forward. GATR2 won its quarterfinal and semi-finals matches and faced off against Team YNOT from the University of Tennessee in the tournament finals. GATR2 won in dominating fashion and cemented UF into the top spot of Vex robotics in the country. We are looking forward to continuing our success at the VexU Robotics World Championship in June!

Additionally, our GATR1 team was a finalist for the Engineering Design Award. The Design Award recipient demonstrates the ability to implement the most effective and efficient robot design process. GATR1’s Engineering Notebook and discussion with the judges demonstrated the team’s ability to produce quality robots. While we did not win the award, it was a great achievement to be nominated as a finalist.

Combined, our teams had 14 wins and 1 loss throughout all matches at the event. This type of success comes only with the help of many students and most importantly many faculty members. We would like to shout out our team sponsor, Dr. Griffis, as well as the 980-SDC coordinator Daniel Preston, for their help in facilitating our team purchases and operations, and for securing us a space to practice and program. Additionally, we would like to thank Tina Bolton, Jennifer Brown, and Jessie Hsueh for taking many hours of their time over the last several weeks and months to secure us both funding and travel resources. And we would like to thank the many other faculty members, including Dr. Taylor, for helping us throughout this difficult year.”

If you would like to check out some videos and pictures from the event, you can use the link below.

A short video that gives a description of the game can be found here:

Some tips from Cameron for watching the video:

All matches have been labeled with our respective team and the team we are playing against; some of our most competitive matches are GATR1 vs RISE, GATR1 vs SPARK, GATR2 vs SENDIT, and GATR2 vs YNOT.