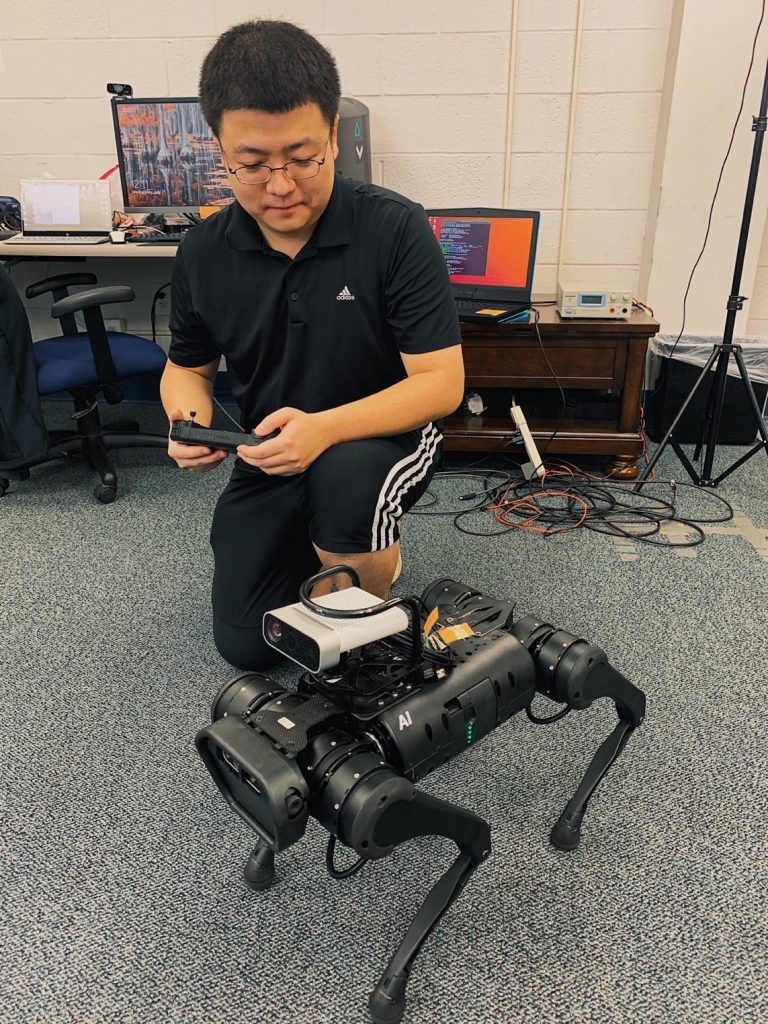 This story was originally published on WUFT.org.

Many pet owners teach their dogs how to sit, roll or shake hands, but rarely do they ever train their pets to guide firefighters out of a burning building.

A group of doctoral students led by Eric Jing Du, a professor in the Department of Civil Engineering at the University of Florida, have trained and developed robotic dogs with the intent of helping first responders virtually see through walls in situations that they would otherwise be blindsided by. Firefighters who have trouble navigating through fires in an unfamiliar environment would be able to escape these situations with the help of the dogs.

Since 2015, Du has aimed to understand how the robotic dogs can impact human interaction and possibly prevent unnecessary deaths of future first responders.

“Human beings cannot go into these dangerous rooms with fire and hazardous substances, but they can send this robotic dog there,” Du said.

Through LiDAR scanning technology, the robotic dogs are able to detect an image that sits behind a wall and first responders wearing augmented reality (AR) goggles can receive it. This gives firefighters the illusion that they can see through walls and makes it easier to rescue people without putting their own lives at risk.

The Skin Cancer Foundation found that firefighters have a 45% higher rate of melanoma, which can be linked to excessive exposure to chemicals, such as flame retardants, used to extinguish fires.

“I think the dogs will be a positive addition to the rescue team,” Hillhouse said. “If we can incorporate a virtual map that helps firefighters share data behind walls and navigate through a zero-visibility environment, I think it would be very beneficial.”

Du has collaborated with Jason Moats, the Director of Testing and Innovation Center at TEEX, which is a training academy known for instructing about 200,000 emergency responders across the world each year.

Moats and Du have created three buzz words for the robotic dogs: Guide, Guard and Assist. This means that the robots will guide firefighters by helping with wayfinding, guard by protecting them from a dangerous situation and also assist by carrying heavy equipment.

“When going into a fire situation, they get soaked with water and that weight doubles. Now you’re talking about 60 pounds,” Moats said. “If they had the robotic dog with them to carry this equipment up ten flights of stairs, it could potentially be revolutionary.”

Even though these dogs represent a turning point in modern technology, they still have a long way before they can be exposed to the conditions they are needed for.

“We are looking forward to evaluating this interesting concept because in my experience of working with these technologies in the past, the heat causes them to shut down,” Hillhouse said.

Another challenge that these robotic dogs face is their short-span battery life. A fully charged dog can only last about 30 minutes before it needs to be plugged in again. Du estimates that it will take another 10 years before the robotic dogs are fully capable of functioning properly in the field, but that does not mean researchers cannot be proactive about experimenting with the potential benefits they can offer.

“Even though there are still many issues with the robotic dogs, we want to know how they will change the behaviors of first responders. Otherwise, we are wasting valuable time,” Du said.

In the near future, Du expects the robotics dogs to work as a team and possibly share information among each other. While one dog scans the room for images behind a wall, another can use a Sonar scanner to detect human heartbeats. Together, the dogs aim to help and protect emergency responders.

“I appreciate that we have people that recognize how many challenges there are in the emergency services and are looking to make the first responder’s lives better,” Hillhouse said.