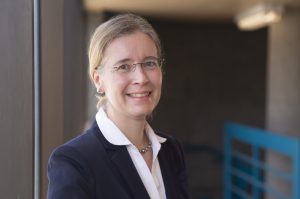 Marianne Francois (Ph.D., AEMES* ’02) was named the Division Leader of the Theoretical Division at Los Alamos National Laboratory (LANL) in May 2020. Achieving this position was the culmination of 18 years of increasingly more complex work and greater responsibility. Of her success, she said, “It is an honor and very humbling to be leading a large number of scientists across multiple disciplines.”

Francois began her career as a post-doctoral researcher at LANL in 2002, shortly after receiving her Ph.D. in aerospace engineering. She progressed to becoming a Scientist in the Continuum Dynamics Group, where for the next 10 years she studied computational methods for material sciences applications and hydrodynamics instability. She then began advancing in leadership positions, first becoming a deputy group leader in the Theoretical Division, overseeing 40 scientists who were working with fluid dynamics and solid mechanics. In 2015 she became a group leader in the Weapons Physics Directorate, where her team worked on methods and algorithms for the Computational Physics Division. Three years later, she was promoted to program manager for Advanced Simulation and Computing (ASC) Physics Engineering Modeling (PEM). Not quite two years after that, she was selected to become the Theoretical Division leader. Today she manages six different groups comprised of 400 researchers, including 140 postdocs. “In my case the post-doctoral program at LANL was a very strong portal for my career path,” Francois said. “I would recommend it to anyone interested in pursuing theoretical and computational research and exploring a national laboratory environment.”

Not one to rest on her laurels, Francois is looking at the next exciting thing on the horizon for her division – exascale computing. Exascale computing refers to computing systems capable of at least one exaflop or a billion x a billion (1018) calculations per second. That is 50 times faster than the most powerful supercomputers being used today. At Los Alamos, under the guidance of Francois and others, the Exascale Computing Project (ECP) aims to develop “a capable exascale ecosystem, encompassing applications, system software, hardware technologies and architectures, and workforce development to meet the scientific and national security mission needs of the U.S. Department of Energy (DOE) in the mid-2020s time frame,” LANL reveals.

“Bala” Balachandar, Ph.D., William F. Powers Professor and Distinguished Professor in the Department of Mechanical and Aerospace Engineering (MAE) at UF commented, “Exascale computing is the cutting edge now, and it will become common place in a decade or so. Marianne, by leading the T-division at LANL, is truly at the forefront of this cutting edge technology. This is particularly timely, as UF has just announced its incredible investment in data-driven science, thus ensuring even more seamless collaboration between our faculty and Los Alamos and other DOE laboratories under Marianne’s leadership.” 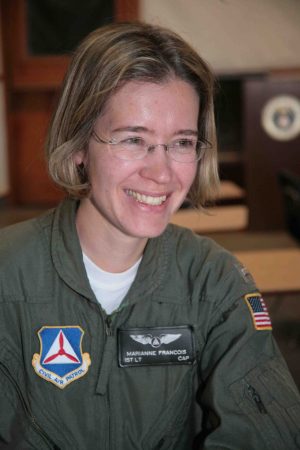 When she has any downtime, Francois loves to fly. She has been a licensed pilot since she graduated from high school in France. Today she pilots a single-engine Mooney aircraft, and enjoys cross-country flying. Francois is a member of the Civil Air Patrol and was a mission pilot for search-and-rescue efforts on several occasions as part of the New Mexico squadron. She flew a Cessna 182 at that time. She also served as an aerospace officer in CAP, providing aerospace education for cadets between the ages of 12 and 18.

It was actually this passion for flying, starting at a very early age, along with the desire to be an inventor that led to her pursuit of an aerospace engineering degree. She received her B.S. degree from EPF Ecole d’Ingénieures in France and her M.S. degree from Embry-Riddle Aeronautical University in Florida. While she was at Embry-Riddle, her advisor introduced her to Dr. Wei Shyy, who was then the chair of the Aerospace Engineering, Mechanics Engineering & Science Department at the University of Florida. Professor Shyy invited Francois to join his department as an assistant and served as her mentor while she pursued her Ph.D. “The training and experience I received at the University of Florida by working with Dr. Shyy prepared me extremely well for tackling challenges in my work throughout my career at LANL,” Francois said.

Francois’ aspirations for the future encompass a truly high-flying goal – leading the LANL Theoretical Division to make contributions in the area of theoretical physics to benefit AI and quantum computing.