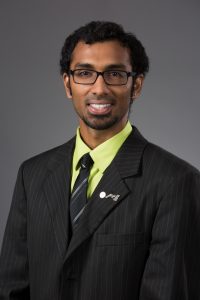 An aerospace graduate student from the University of Florida has been selected to participate in the 66th annual Lindau Nobel Laureate Meeting. Sahadeo Ramjatan, who studies thermal sciences and fluid dynamics, will travel to Germany at the end of June for the event.

Once a year, 30–40 Nobel Laureates convene in Lindau and meet with the top 400 scholars and researchers from around the world who are deemed to represent the next generation of leading scientists. The meeting fosters exchange between scientists of different generations, cultures and disciplines. This year’s focus will be on physics and will include 2012 Nobel Laureates Serge Haroche and David Jeffrey Wineland, who developed methods for measuring and manipulating individual particles while preserving their quantum nature, and 2015 Nobel Laureate Takaaki Kajita, who helped expand the basic understanding of elementary particles by showing that neutrinos have mass.