The College of Engineering was fortunate to have two special guests join us for our commencement ceremonies last weekend. Jim Allchin, one of the pioneers at Microsoft directly responsible for the development of Windows NT, was recognized with the University of Florida Distinguished Alumni Award. Henry Upjohn, whose invention helped leading door manufacturer, Special-Lite to become the industry’s standard in entrance systems, and who has since fostered a strategic partnership with our hurricane researchers, was honored with the University of Florida Distinguished Achievement Award. Allchin and Upjohn spoke to our graduates at the morning and evening ceremony, respectively. 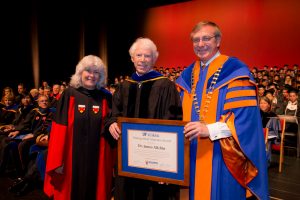 After leaving the Florida orange grove farm of his youth, Jim earned computer science degrees from the University of Florida, Stanford University, and Georgia Institute of Technology.

While pursuing his Ph.D. in Computer Science at Georgia Institute of Technology in the early eighties, he was the primary architect of the Clouds distributed object-oriented operating system. His thesis was entitled “An Architecture for Reliable Decentralized Systems.”

Jim later joined Microsoft where he held a number of positions. He led the Platforms division at Microsoft, overseeing the development of Windows Clients, Windows Servers, Server Products such as SQL Server, Exchange Server, and Developer Tools. He is perhaps best known for building Microsoft’s server business into a multi-billion dollar business, one of the most profitable at Microsoft.

Allchin was a long-time member of the Senior Leadership Team at Microsoft — a small group responsible for developing Microsoft’s core direction along with Steve Ballmer and Bill Gates. Bill Gates said of Jim: “He’s a brilliant technologist, visionary, and a strong leader.” After serving over sixteen years at Microsoft, Allchin retired in early 2007.

Allchin has won numerous awards in his career, such as the Technical Excellence Person of the Year in 2001.

Allchin’s efforts in philanthropy are dedicated primarily to education in Africa and in the U.S., protecting marine environments in Indonesia and the Northwest, and providing access to clean water in many areas around the world.

Jim is also a musician. His albums, Overclocked and Q.E.D., have both received widespread acclaim, especially for Allchin’s guitar work.

Both Overclocked and Q.E.D. were featured on iTunes banner pages as New and Noteworthy and both were in the top 10 on Internet Blues Radio.

He lives with his family in Seattle. 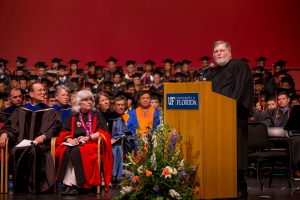 Henry Upjohn speaks to graduating seniors during our evening graduation ceremony at the Phillips Center for the Performing Arts on May 3.

Henry Upjohn is the chief executive officer and majority owner of Special-Lite, Inc., the leading manufacturer of flush doors. Special-Lite doors are found nationwide in schools, hospitals, commercial establishments and many other facilities, including the National Institute of Health (NIH) and the Center for Disease Control (CDC). The unique engineering of these doors is the result of Henry’s development of a proprietary foam injection machine that fills molds uniformly with a high-density urethane foam that is CFC-free, and thus protective of the environment.

Henry has a bachelor’s degree in engineering from Western Michigan University, where he has also assisted in the evaluation of senior engineering projects. He has worked extensively with the University of Florida’s Engineering School for Sustainable Infrastructure & Environment (ESSIE). He lead his team of Special-Lite engineers on a special project with ESSIE’s Powell Family Structures and Materials Laboratory, working with hurricane expert Dr. Forrest Masters to develop better ways to test the affects of hurricane-force winds on buildings and structures.

During college Henry had a variety of work assignments that allowed him to gain experience in many other facets of the manufacturing process including working at a General Motors assembly plant, and as an instrument designer for Thermotron. He designed and built an optical dewar, used to determine the half-lives of excited states of organic solvents, at Hope College. Henry also worked as the manager of Mechanical Research and Development for Roto Finish, a builder of mechanical finishing equipment, largely for the automotive industry.

Henry’s vision for Special-Lite has always been employee-centric, a socially responsible culture that provides quality jobs to its employees and quality products to its customers. Since buying Special-Lite in 1998, Henry has been able to lead what was a small manufacturing company in its “garage shop” phase to an industry-leading company that continues to be focused on the employee as well as the customer.