Federal, state and local governments have been investing millions to restore coastal wetlands and oyster reefs degraded by centuries of pollution, development and resource extraction. Their goal is to regain the benefits communities once derived from these vital, living ecosystems, such as clean water, productive fisheries and protection from storms and flooding. A recent study of oyster restoration has shown that, if we want our investments to pay off, we have to go bigger.

Research from the University of Florida on “Restoring the eastern oyster: how much progress has been made in 53 years?” synthesized details of nearly 1,800 projects conducted over the past half century to evaluate how far we have come in restoring these filter-feeding bivalves to coastal waters. The results of the study are published online in Frontiers in Ecology and the Environment. 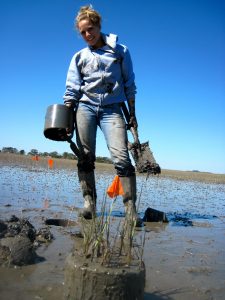 The study found that, although 5,200 hectares (12,850 acres) of oyster reef have been rebuilt across these regions since the 1960s, “this represents only 4.5% of the oyster reef area that has been lost across the US Atlantic and Gulf coasts,” said Dr. Christine Angelini. Angelini is an Assistant Professor at UF’s Engineering School of Sustainable Infrastructure and Environment and principal investigator in the study.

Beck et al. reported in 2011 that approximately 85% of oyster reefs have been lost worldwide and are in only fair, poor or functionally extinct condition in US waters. “Although these results indicate we have a long way to go to re-build oyster reefs, we learned a lot about the economics of oyster restoration in conducting our study”, says Angelini. “These insights will hopefully guide where and how future oyster restoration takes place.”

Research on 88 specific projects that provided data on reef construction costs found that the average cost of oyster restoration is $299,999 per hectare, with reefs built from concrete being 10 times more expensive than those built from a mix of oyster shell and other materials ($1,225,579 vs. $120,166 per hectare, respectively).

Using data provided by Grabowski et al. in 2012, the researchers estimated $10,325 per hectare as the average annual value of ecosystem service benefits derived from restored reefs starting one year post-construction. Based on calculations for a 14-year cost recovery cycle, return on investment (ROI) varied considerably among substrates, with only 8% of concrete- based reefs yielding a positive ROI compared to 67% of oyster shell reefs. ROI also varied with project size: while only 29% of projects smaller than 0.4 hectares yielded a positive ROI, this percentage jumped to 75% for projects larger than 0.4 hectares. 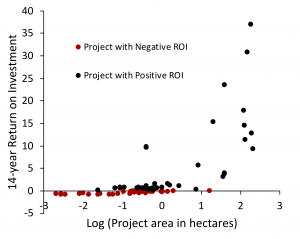 The UF study concluded from these ROI analyses that, in order to facilitate the recovery of coastal ecosystems and their services, scientists and resource managers must adopt a new restoration paradigm, prioritizing investment in sites that maximize economic and ecological benefits and minimize construction costs.

Many of these large, cost-effective oyster restoration projects have taken place in the Chesapeake Bay. Dr. Mark Luckenbach, Associate Dean of Research and Advisory Services at the Virginia Institute of Marine Science at the College of William and Mary and a co-author on the study, has worked extensively with Chesapeake Bay oyster restoration practitioners. He reports, “In Chesapeake Bay numerous large-scale oyster reef restoration projects have been successfully completed over the past decade; and our results indicate that, when proper substrate, location and reef architecture are employed, the return on investment in this region can be quite substantial.”

This proposed new paradigm can also be seen in a restoration effort currently underway on Florida’s Gulf coast near Cedar Key. A team led by the paper’s coauthor, Dr. Peter Frederick of the UF Department of Wildlife Ecology and Conservation, is restoring a 3,000-year-old, 3-mile-long reef.

“Most oyster reefs provide water filtration, essential fish nursery habitat, nutrient sequestration, and reduction of wave energy. This particular reef chain was picked out of hundreds because it also functions like a leaky dam, holding freshwater from the Suwannee River close to shore, thereby keeping salinities in a range necessary to promote the productivity characteristic of estuaries,” Dr. Frederick noted.

“Over 90% of American seafood species spend some portion of their life cycle in estuaries, and intermediate salinities are crucial to that production.  By restoring this particular reef, the ecological functions of an entire estuary are positively affected. We predict a benefit ratio of 271 hectares (670 acres) of marsh and estuary enhancement for every acre of reef restored,” Frederick said.

In addition, Frederick hypothesized that this restoration will result in increased resilience of the whole ecosystem. The restored reef will be less likely to die because it, too, experiences intermediate salinities necessary for oyster survival.

Compared to Chesapeake Bay and Gulf of Mexico shorelines where the study estimates that 0.9 and 4.5% of historic reef area has been rejuvenated through restoration, respectively, the study finds that very little work has been done in the Mid-Atlantic US where polluted waters make restoration of this shellfish unattractive to coastal managers due to concerns for public health. In New York and New Jersey primarily, the enforcement agencies governing seafood have strongly upheld laws that prohibit harvesting of oysters from polluted waters. A single outbreak of illness due to toxic seafood could ruin the industry, so the restoration of oyster habitat in polluted waters is not often pursued. Only 0.07% of the historic extent of oyster reefs in this region has been restored.

In New England, there had been only recreational harvests until recently, though now there is some commercial harvesting in open waters. Another co-author of the study, Ray Grizzle, Professor at the University of New Hampshire, explains New England’s approach,” We have been restoring polluted reefs in New Hampshire for about 20 years. We prefer to work in waters closed to commercial harvesting because it ensures that the oysters will not be harvested and the restored habitat will have time to develop. We do some restoration in open waters, but the New Hampshire Fish & Game Department allows us to post “no harvesting” signage for up to five years.”

Dr. Rob Brumbaugh, Senior Marine Scientist at the Florida chapter of The Nature Conservancy and co- author of the study, summed up the findings: “Oysters have supported extremely valuable fisheries in many estuaries, and their enormous value to society in cleaning coastal waters, serving as fish habitat, and even reducing the effects of storm waves is becoming ever clearer.  For all these reasons, it is critical that we accelerate restoration and get better at scaling the effort to match society’s needs and expectations.”

Brumbaugh concluded, “This paper shows us that, while we’ve made some progress in some locations, we need to strengthen the science and apply it better in many places. With Restore Act funding from the Deepwater Horizon oil spill being directed at restoration across the Gulf of Mexico, and oyster reefs being a priority for that funding, we have a terrific opportunity to apply the findings of this study and increase the scale and impact of restoration in Florida and beyond.”