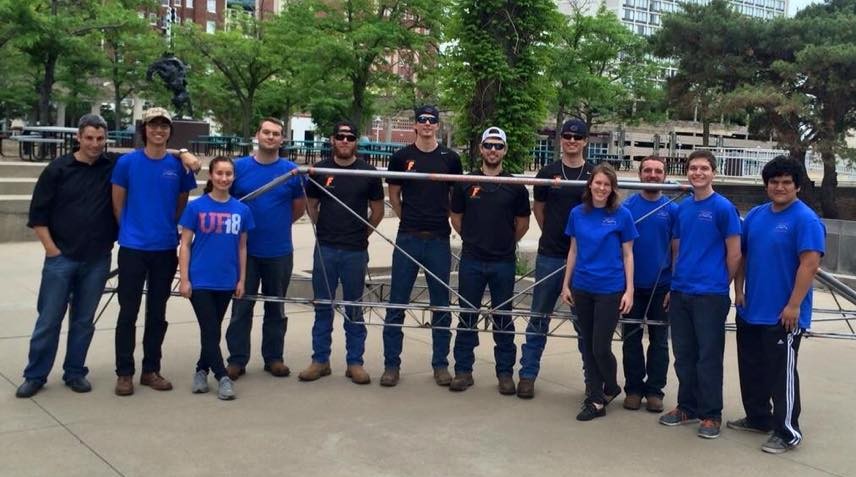 Read more about the national championship team and the competition in The Gainesville Sun, on the ASCE blog and on the team’s website.

Teams traveled to compete in Kansas City from China, Canada, Mexico, and all over the U.S. – including Alaska.

After designing four prototypes, a final bridge design was selected by the group and was then fully optimized by team captain, Juliana Rochester. It was a combination of a two-dimensional and three-dimensional girder that was very minimalistic. It completely relied upon the 1 ¾” outside diameter truss to carry the entire load, with four webs connecting the mid portion of the girder to the truss. 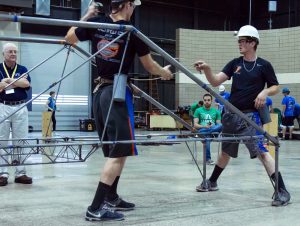 In practice runs, assembly team members Justin Rayl, Kyle Willems, and Andrew Jenkins got their time down to 7:29. During the competition, the polished floors were slick and they had to be careful with their speeds while they put the bridge together. Everything went according to plan with one minor exception – a bolt fell and touched the ground and incurred a 15 second penalty. The final time was 8:48, and the weight of the bridge was apparently ten pounds lighter than any other team’s.

Our team won for lightness and structural efficiency. The speaker called up third place overall, Ecole de Technologie Superieure, then second place was California Polytechnic State University, San Luis Obispo. When the speaker said, “first place overall for the National Student Steel Bridge Competition is the University of Florida,” there was no one left in our seats, everyone jumped up and starting cheering and ran up on stage.

We would like to thank our sponsors Bill and Linda Eckhoff, CH2M Hill, Don Willems Builder, Inc., and Complete Structural. Their continued support was critical in helping us win at nationals. Thank you!!