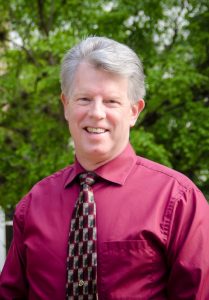 With recent changes in the recommended annual limit on eye lens exposures to ionizing radiation, there is considerable interest in predictive computational dosimetry models of the human eye.

Dr. Wesley Bolch, a professor in the J. Clayton Pruitt Family Department of Biomedical Engineering at the Herbert Wertheim College of Engineering, has developed rapid and clinically accessible computational tools for use by radiologists and radiation oncologists to assess radiation organ dose and associated secondary cancer risks to patients with ophthalmic diseases following diagnostic imaging or radiation therapy.

During his research, Bolch did radiation transport modeling of x-ray therapy, looking at radiation dose to the target (the macula), but also to non-targeted structures such as the non-macular retina, lens, cornea, and optic nerve.  “The eye models our team used in these studies were all of ‘average’ size and for someone with 20/20 vision,” Bolch said.  “Clearly, patients have a range of eye sizes, and some are near-sighted or far-sighted as well. No models existed that would allow for a ‘deformable’ and/or ‘scalable’ model – one that could be changed in both eye shape and size.”

The team Bolch assembled to develop such a model included BME University Scholar Daniel El Basha; Dr. Takuya Furuta, Nuclear Science and Engineering Center, Japan Atomic Energy Agency; and Dr. Siva Iyer, a retinologist in the Department of Ophthalmology at the UF College of Medicine. Upon completion of the research, the team produced a paper showing their results, which was recently published in one of the premier medical physics journals, Physics in Medicine and Biology, with Daniel El Basha as first author.

The paper describes how previous computational eye models were typically constructed based on eyes of nominal size and of a roughly spherical shape associated with the emmetropic eye. Bolch, El Basha, Furuta and Iyer developed a geometric eye model that is both scalable (allowing for changes in eye size) and deformable (allowing for changes in eye shape), and that is suitable for use in radiation transport studies of ocular exposures and radiation treatments of eye disease.

The team’s studies for this project involved the posterior eye structures and the crystalline lens, but they concluded, “Future applications of the model can include more extensive tabulations of dose coefficients to all ocular structures (not only the lens) as a function of eye size and shape, as well as the assessment of x-ray therapies for ocular disease for patients with non-emmetropic eyes.”

At present, the model is being explored for possible use in radiotherapy treatment simulations for AMD at the University of Florida Proton Therapy Institute, as well as to assess ocular doses for cardiologists performing high-dose fluoroscopically-guided surgeries.

This research was supported by grants from Oraya Therapeutics, Inc. (Newark, California).