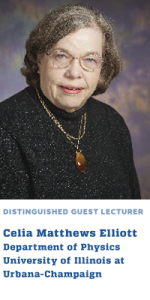 Science is a social, collaborative enterprise that depends on eventual consensus among its practitioners to advance. To paraphrase Sir Francis Darwin, in science, credit goes not to the person who first has an idea, but to the person who manages to convince other scientists that the idea is correct and important. In this talk, we’ll examine the three foundational elements of persuasive discourse and how to use them effectively to enhance the impact of your papers and presentations.

Celia Mathews Elliott is an academic professional with primary responsibilities in departmental and research administration in the Department of Physics at the University of Illinois at Urbana-Champaign. She has extensive experience in grant and proposal writing and the funding of scienti c research in academic institutions. She has presented technical writing and proposal-writing workshops at Sandia National Laboratories, Lawrence Livermore National Laboratory, the University of Sao Paulo (Brazil), and National Chiao Tung University (Taiwan), as well as numerous institutions in the former Soviet Union. She has presented four webinars for the American Chemical Society on scienti c communications and proposal writing and contributed to a technical-writing resource for the Institute of Electrical and Electronics Engineers. She answered questions on technical writing in two Reddit\science “Ask Me Anything” appearances, and her lectures on scientific communications have been downloaded by people from more than 90 countries.

In addition to her research administration duties, she currently teaches two courses a semester in scientific and technical communications, one for physics upper-level undergraduates and one for College of Engineering graduate students. She was presented an honorary doctorate in humane letters from South Ural State University (Russia) in 2003, and the Civilian Research and Development Foundation Recognition Medal in 2005 for her work with scientists in the former Soviet Union. She received the Chancellor’s Academic Professional Excellence Award from the University of Illinois in 2002, and won the American Physical Society’s Physics Haiku Grand Champion prize in 2004. Her teaching was recognized by the Department of Physics with the Doug and Judy Davis Award for Excellence in Teaching Undergraduate Physics in 2013, and her contributions to research administration were recognized by the University of Illinois SPaRC Career Achievement Award in 2016.

FREE & OPEN TO ALL