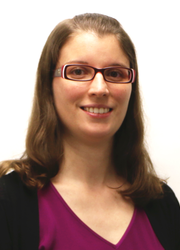 Alexandra Garraud is currently a research assistant professor in the Electrical and Computer Engineering departement at the University of Florida. Her research interests include the fabrication, the development and the characterization of magnetic microsystems with a particular attention for biomedical applications.

During her postdoctoral position, from 2012 to 2015, in the Electrical and Computer Engineering and the Biomedical Engineering departments, she has acquired significant multidisciplinary experience by working on multiple sponsored research projects (particle beam physics, biomedical engineering).