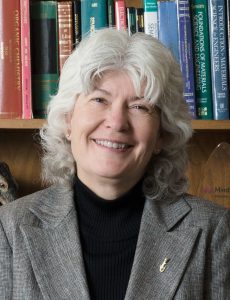 Cammy R. Abernathy received her S.B. degree in materials science and engineering from the Massachusetts Institute of Technology in 1980, and her M.S. and PhD degrees in materials science and engineering from Stanford University in 1982 and 1985 respectively. She joined the University of Florida’s Department of Materials Science and Engineering as a professor in 1993. In 2004 she became the College’s Associate Dean for Academic Affairs and in July 2009 was appointed Dean of the College of Engineering. Dr. Abernathy’s research interests are in synthesis of thin-film electronic materials and devices using metal organic chemical vapor deposition and molecular beam epitaxy. She is the author of over 500 journal publications, over 430 conference papers, one co-authored book, 7 edited books, 8 book chapters, and 7 patents. Dr. Abernathy is a fellow of the MRS, AAAS, AVS, APS and of the Electrochemical Society. She is also a Director of the American Society of Engineering Education (ASEE) Engineering Deans Council Executive Board.