The 2015 UF Homecoming festivities will be one for the books.

Dr. Herbert “Herbie” Wertheim, the Inaugural Honorary Chairman of the Herbert Wertheim College of Engineering, joined in on the Homecoming fun this year. 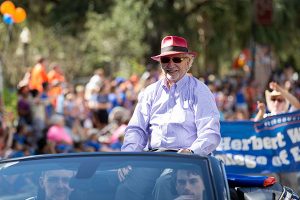 On Friday, November 6, Herbie rode in the Homecoming parade, one of the largest running traditions at UF. Chants of “Dr. Herbie, Dr. Herbie!” could be heard from the crowd as he proudly introduced the Herbert Wertheim College of Engineering (HWCOE).

Before the parade started, Herbie chatted with Gator Engineers from various departments that were also showcasing in the parade – including the Benton Engineering Council and the Department of Electrical and Computer Engineering.

On Saturday, November 7, Herbie attended the Gator Engineering Alumni Reunion alongside Dean Cammy Abernathy. He joined more than 400 Gator Engineering alumni and friends as they celebrated a new tradition as the HWCOE.

“We’re producing the best engineers in the world – under the leadership of Dean Abernathy,” said Herbie.

Herbie and his wife, Nicole, and the Dr. Herbert & Nicole Wertheim Family Foundation, made a $50 million gift to UF last month – the largest cash gift in the university’s history. The lead gift was recognized by a naming of the college and serves as a catalyst for a $300 million campaign to transform engineering at UF.

Reunion attendees were able to purchase an exclusive #FLADora hat at the reunion, a symbol of a new era made possible by Herbie’s catalyst gift. Proceeds from the hats were given to the Engineering Innovation Fellows Fund.

In addition to being the naming benefactor of the college, Herbie was also recently recognized as the 2015 Engineering Innovation Awardee during the college’s West Coast Advisory Board last month. The award, given to Gator Engineering graduates who have demonstrated extraordinary contribution to society through innovation, was presented by UF President W. Kent Fuchs.