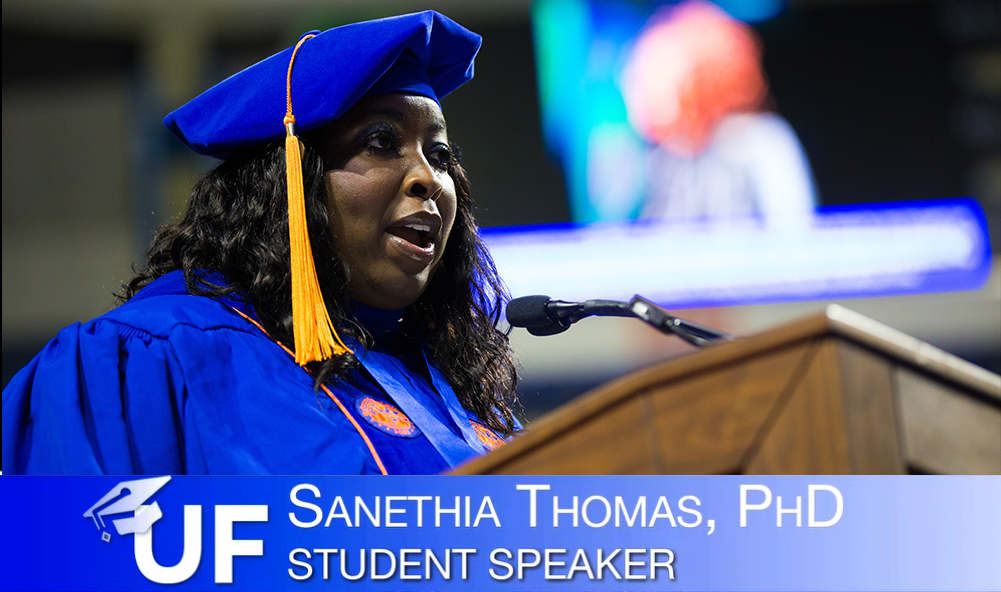 Sanethia Thomas, Ph.D., served as the student speaker for the Herbert Wertheim College of Engineering’s Master’s, Specialist’s and Doctoral recognition ceremony on May 6, 2019.

Sanethia Thomas earned a Ph.D. in human-centered computing from the University of Florida’s Department of Computer & Information Science & Engineering (CISE), and was advised by Juan E. Gilbert, Ph.D., the Banks Family Preeminence Endowed Professor and chair of CISE.

As a black woman doctoral graduate, Thomas represents less than a fraction of a percent of computer science doctoral graduates nationwide and strives to serve as a role model to younger generations.

“I stand here as a statistic who made a difference. I stand as a minority in race and gender – and that did not stop me from getting an engineering degree,” she said. “I am compelled to invest my total self to impact and help minority students who want to go to college, specifically those who want to major in STEM fields.”

Thomas worked hard throughout her academic career to achieve her dreams. In her own words:

“When I told my mother that I wanted to go to college her reply was, ‘I don’t know honey; I don’t have the money for that.’ I now realize her response came from a place that reflected her reality. As a survivor of domestic abuse, her newest battle as a single parent was fighting for survival by ensuring she had enough money for food and shelter. She could not see having money beyond a week, nevertheless having money for college. That was not practical. When I heard those words, I did not hear her reality; I heard that I had to do all that I could to get a scholarship.”

As a result of her academic achievements, Thomas was awarded scholarships starting from seventh grade until college. She received academic and athletic scholarships to the University of Texas El Paso, where she majored in Computer Information Systems. She also holds a Master’s degree in Youth Development Leadership from Clemson University, where she graduated in the Top 10 percent of her class.

Thomas has received numerous accolades for her research and work. She is a National Science Foundation Graduate Research Fellow and a fellow of the National Consortium for Graduate Degrees for Minorities in Engineering and Science, Inc. (GEM).

In addition to her academic honors, Thomas is adept in athletics. She is a former professional basketball player, representing the U.S. as she played basketball in Amsterdam, Belgium and Paris. Her basketball experiences have fueled her research in developing technologies that will assist athletes in transitional skills and mental health.

She is pursuing entrepreneurship through the commercialization of her dissertation research and has started a company called Second-Shot that is dedicated to developing personal development tools for athletes.

Beyond academia and entrepreneurship, Thomas enjoys spending her time traveling, playing sports and reading.  She also loves cupcakes – the kind with the buttercream icing.