Celebrating Longtime Supporters of Engineering Education at the University of Florida

Frank Townsend, Harlan Harrell and Don Irons were inducted into the Benton Loyalty Society on March 23, 2018. The longtime supporters have a combined 85 years of continued giving to People, Places and Programs that are Powering the New Engineer to Transform the Future. Their unwavering efforts and philanthropy continue to support scholarships, research work, infrastructure, student organizations and more at the Herbert Wertheim College of Engineering. 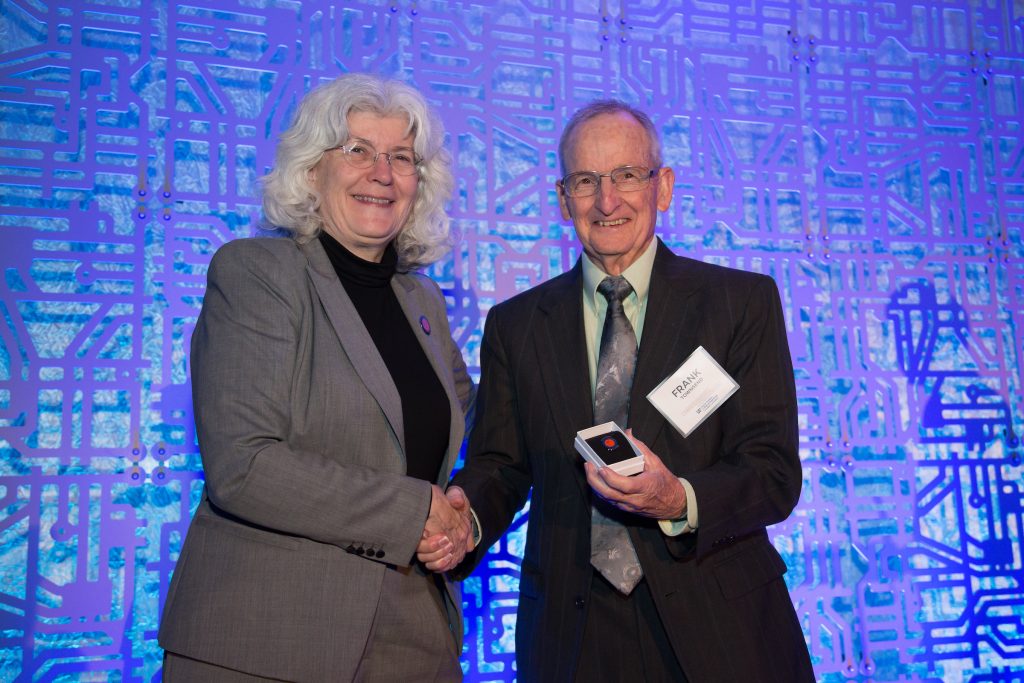 Frank Townsend is a retired professor emeritus of civil & coastal engineering at UF. For him, the position was more than a job. It was a way to interact with students, colleagues, organizations such as the American Society of Civil Engineers and new research challenges daily — all of which he said was a joy to be involved in.

With more than three decades of continued support to UF, he says sharing is fundamental to his philosophy.

“I stood on the shoulders of my professors,” he said. “And hopefully, my students are now standing upon mine.”

Even after retiring from UF, he continues to focus on building the confidence and drive of the next generation of engineers. He hopes newcomers to the field to look at engineering with an open perspective adaptable to change, just like he did.

“I’m reminded my entire undergraduate career was done with a slide rule, and I don’t long for ‘the good old days,’” he said.

Townsend believes that engineering research and education are fundamental to our future well-being. He encourages students to go out to solve society’s problems and use their knowledge to give back to the community, be it through joining organizations, new inventions or day-to-day work.

“Being part of the Gator community means striving to do your best,” he said, “leaving your comfort zone, and making the world a better place because you passed by and were a good neighbor.”

Click here to contribute to the Engineering School of Sustainable Infrastructure and Environment fund. 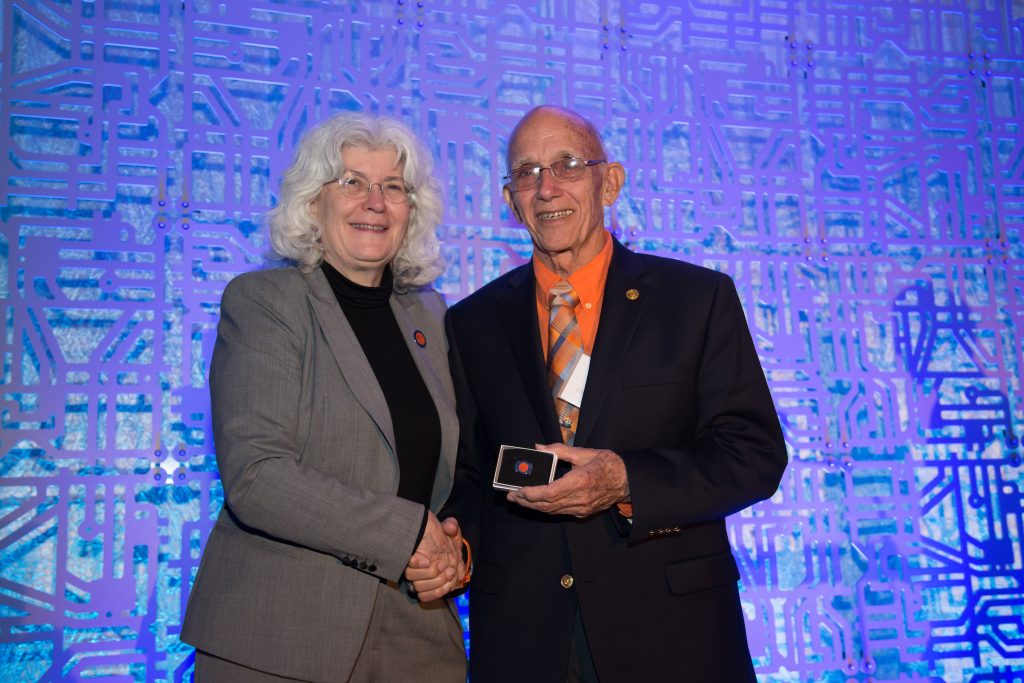 Harlan Harrell received his bachelor’s in electrical engineering from UF in 1961. For over 30 years, he served as the project manager at Rockwell International Corp. He also worked for Boeing as an aircraft designer and manufacturer before retiring in 2000.

Harrell recalls the most inspiring moment of his career came during his work on the Apollo missions. He thrived off of the energy generated from the desire to make it to the moon.

“I am blessed that I have been provided the means [to be able to] support the university and college that propelled me on an exciting and rewarding career,” said Harrell.

In addition to gifting annually to his alma mater since 1983, he and his late wife, Carole, also established the Carole T. and Harlan Y. Harrell, Jr. Endowed Fund for Engineering Ethics in Electrical and Computer Engineering. The endowment supports ethics education in the UF’s electrical and computer engineering department with an annual lecture.

“Being a Gator carries the responsibility to conduct ourselves ethically and with dignity, honor, and integrity,” he said.

When asked what it meant to be a Gator, Harrell stressed two factors: pride and fun.

“Pride in the accomplishments of UF as a whole – the students, the faculty, the graduates, the athletic and academic teams,” he explained. “And fun – attending sporting events, concerts and special alumni functions.”

Click here to contribute to the Carole T. and Harlan Y. Harrell, Jr. Endowed Fund for Engineering Ethics in Electrical and Computer Engineering. 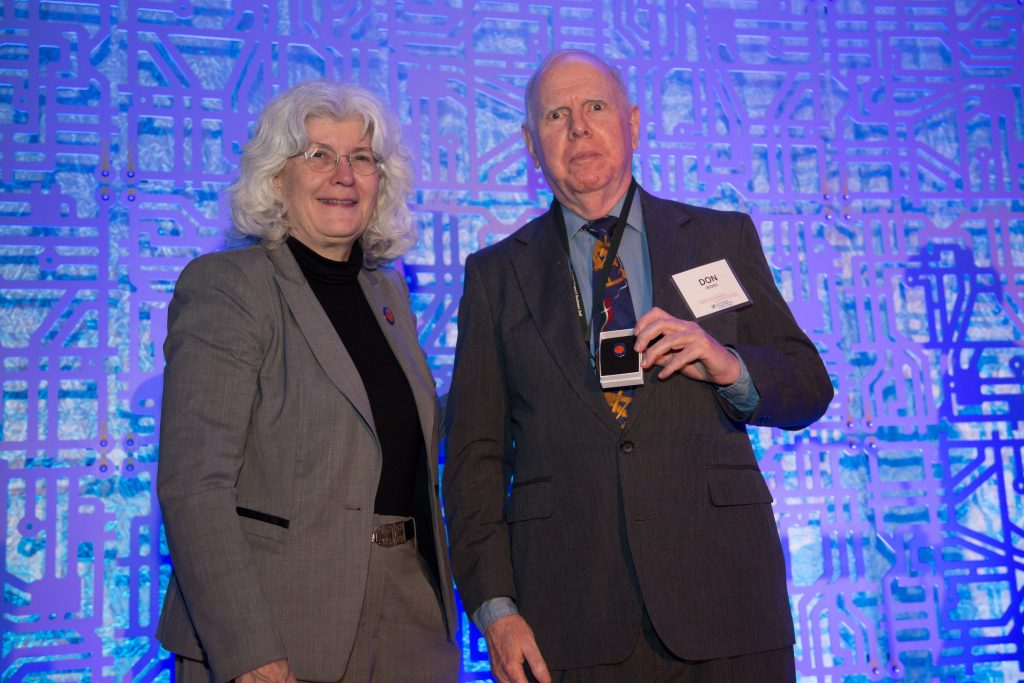 Don Irons graduated from the University of Florida with his bachelor’s in electrical engineering in 1969. A retired NASA engineer, he is one of the college’s strongest advocates in calling on more women in the engineering field.

A firm believer in diversity, Irons channeled this support into action through the creation of the Don A. Irons, Jr. Endowed Fund for Women in Electrical and Computer Engineering (WECE). This fund was created to help support female engineers in the fields of electrical and computer engineering. His fund offers support to WECE for their community outreach and professional development initiatives.

“Women engineers are an untapped resource,” he said. “If we are going to continue to grow, we need women’s perspective, and that is why I provided an endowment gift for the college to be a leader in recruiting women.”

When he is not focused on empowering female engineers, Irons devotes his life as a volunteer with his local humane society.  He excels in matching cats with their perfect human families for adoptions. He also makes sure to return to UF’s campus every fall to wear orange and blue and cheer on the Gators.

Click here to contribute to the Don A. Irons, Jr. Endowed Fund for Women in Electrical and Computer Engineering (WECE).