Two accomplished graduates from the Herbert Wertheim College of Engineering were recently honored as Outstanding Young Alumni by the University of Florida Alumni Association.

Floyd and Conroy were nominated as Gators under the age of 40 who have made momentous strides in their professional careers and significant contributions to their industry. They join the ranks of previously-awarded OYA recipients including meteorologist Stephanie Abrams, politician Adam Putnam and sportscaster and television personality Erin Andrews. 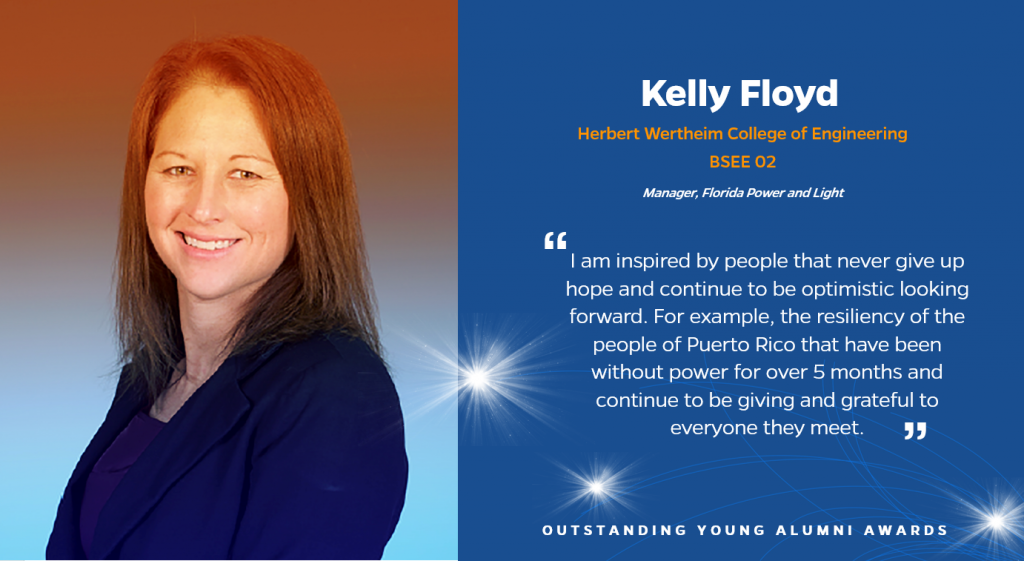 Kelly Floyd graduated with honors from the University of Florida in December of 2002 with a bachelor’s in electrical engineering. In addition to her scholastic accomplishments, she was an Academic All-SEC on the UF Swimming and Diving Team from 1997-1999.

Floyd started her career with Florida Power & Light (FPL) in 2003 as an associate engineer. She has held various roles and growing responsibilities over the last 14 years and continues to excel as a leader in her field. Under her guidance, FPL was recognized for their industry accomplishments and received the International Smart Grid Action Networks’ (ISGAN) 2016 Award of Excellence, as well as the 2016 PA Consulting Group’s ReliabilityOne™ award.

Floyd currently serves as FPL’s Northwest Control Center Manager, where she is responsible for overseeing restoration response for the northern and western regions of Florida. Most recently, Floyd was named Incident Commander during Hurricanes Matthew and Irma. Her responsibilities of managing the overall restoration strategy and response plan included obtaining damage assessment information and leading a site of more than 800 restoration response personnel. 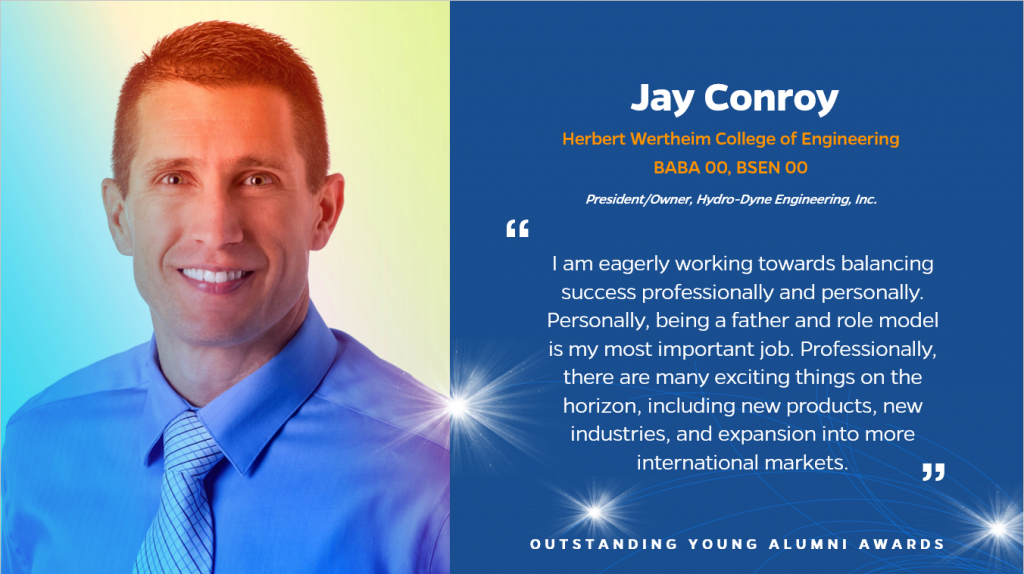 Jay Conroy graduated from the University of Florida with dual degrees in environmental engineering and business administration. Merging his technical background and entrepreneur spirit, he set out on a new path when his then-current employer closed its doors.

At the age of 23, Conroy opened up his own business, Hydro-Dyne Engineering, a company that designs and manufactures screening, handling and grit-removal equipment for municipal and industrial water/wastewater treatment.

Under his leadership, the company has experienced double-digit growth almost every year since its inception. Conroy, who currently serves as president of Hydro-Dyne, now employs 80 employees and holds the No. 97 spot on UF’s Gator 100, a list of the 100 fastest-growing companies led by talented Gator alumni.