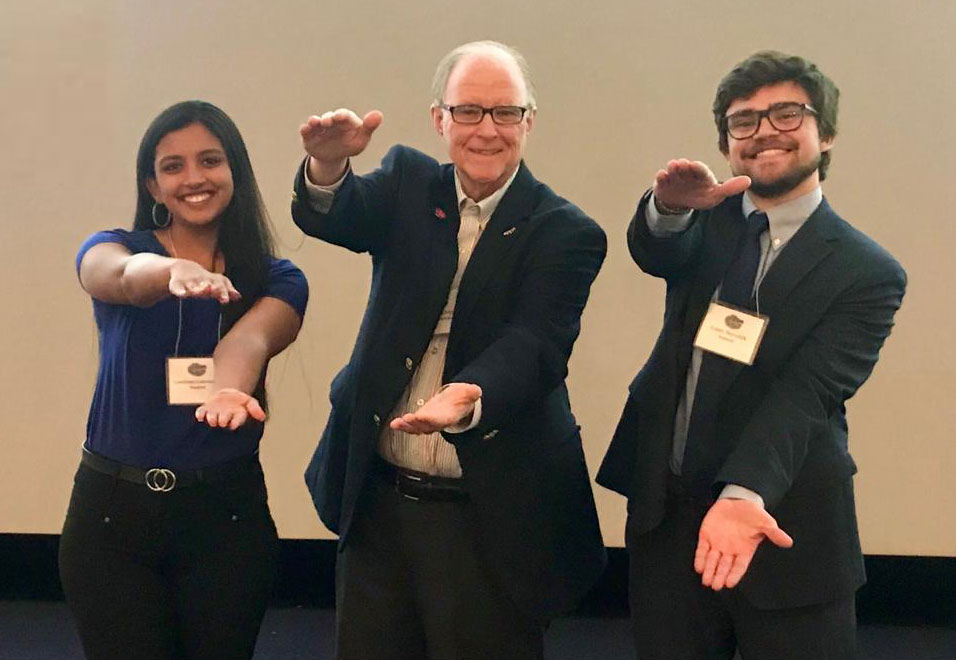 On February 27-28, 2020, Gouthami Gadamsetty (BS ISE, spring 2021) and Gantt Meredith (BS BME, spring 2021) competed fiercely and professionally with 30 other teams from top colleges around the nation. The competition, held at the Lockheed Martin Center for Leadership Excellence in Bethesda, Maryland, involved tense, timed rounds of presentations about an engineering ethics case study scenario prepared by Lockheed Martin engineers. When the dust settled, the Gator engineering team was selected as one of the top six teams to proceed to the semi-final round of competition.

“This was the first time we entered a team in this competition, and it was a wonderful experience for our students to reach the semi-final round amongst such strong competition,” stated Bill McElroy, team faculty coach and Associate Director of UF’s Engineering Leadership Institute (ELI). “I thought our team did a fabulous job in preparing and competing.” Unfortunately, significantly divergent scores by one of the five judges in the semi-final presentation round may have kept the team from becoming one of the two finalists. “Our students learned that sometimes subjective interpretations, based on individual perceptions, can impact an important outcome, and you just have to accept it.”

“I’m incredibly grateful for this experience,” said Gadamsetty. “Ethics is a very important aspect of one’s work and is often understated. I’m thankful for Lockheed Martin’s initiative in sponsoring the event to promote ethics as a principle that is at the center of our engineering work and decision-making. I also appreciated the chance to tour their Global Vision Center, learn about the roles the company plays in space travel and other technological advancements, and operate an F-22 fighter jet simulator!”

“This competition was the perfect capstone to my time as a Gator Engineer,” said Meredith. “By using tools and principles provided in the ELI’s interdisciplinary coursework, Gigi and I were able to address a real-world ethical dilemma in Artificial Intelligence. I am very grateful for the opportunity to represent UF on a national level and for the chance to learn so much about ethical dilemmas in the engineering work space.”

Gadamsetty and Meredith spent a significant amount of time planning and preparing for the competition, guided by Dr. Claudio Spiguel, Professor of Engineering Ethics and Professionalism at the ELI, and McElroy, who served as faculty mentors to the team. “We hope to be able to take a team to compete in the next annual event. We had a truly a memorable time with Gigi and Gantt at this year’s competition,” McElroy concluded.