This article was originally published on Forbes.

With artificial intelligence (AI), researchers have moved toward diagnosing Parkinson’s disease with, essentially, an eye exam. This relatively cheap and non-invasive method could eventually lead to earlier and more accessible diagnoses.

Specific changes within the brain signify Parkinson’s and other neurodegenerative brain diseases (diseases characterized by progressive death of brain cells). But healthcare providers have few affordable or noninvasive ways to diagnose these conditions. Because of this, neurodegenerative diseases in the brain are primarily diagnosed only once symptoms appear.

Even then, diagnosis might involve expensive brain imaging tests patients can’t afford. Although these diseases aren’t currently curable, earlier, cheaper diagnosis could help patients and their families prepare for more advanced disease symptoms — like dementia — which can improve quality of life.

In recent years, scientists have been developing new diagnostic methods by looking through an easily accessible peephole to the brain: the retina of the human eye.

“The retina is a window to the brain,” said Maya Koronyo-Hamaoui, who researches early diagnosis and therapies for Alzheimer’s disease at the Maxine Dunitz Neurosurgical Institute at Cedars-Sinai. The retina, the layer of nerve cells at the back of the eye, is an extension of the brain, and sends visual information to the neural areas responsible for sight. The retina is also easy for doctors and scientists to see with affordable, noninvasive digital imaging.

In one of the latest efforts to find signs of disease through that window, scientists from the University of Florida have tested a new technique using machine learning to identify patients with Parkinson’s disease from images of their retinas. The findings, presented this week at the annual meeting of the Radiological Society of North America, show that machine learning algorithms can be useful in identifying patients with Parkinson’s, picking out signs of disease in images of the small blood vessels of the retina. 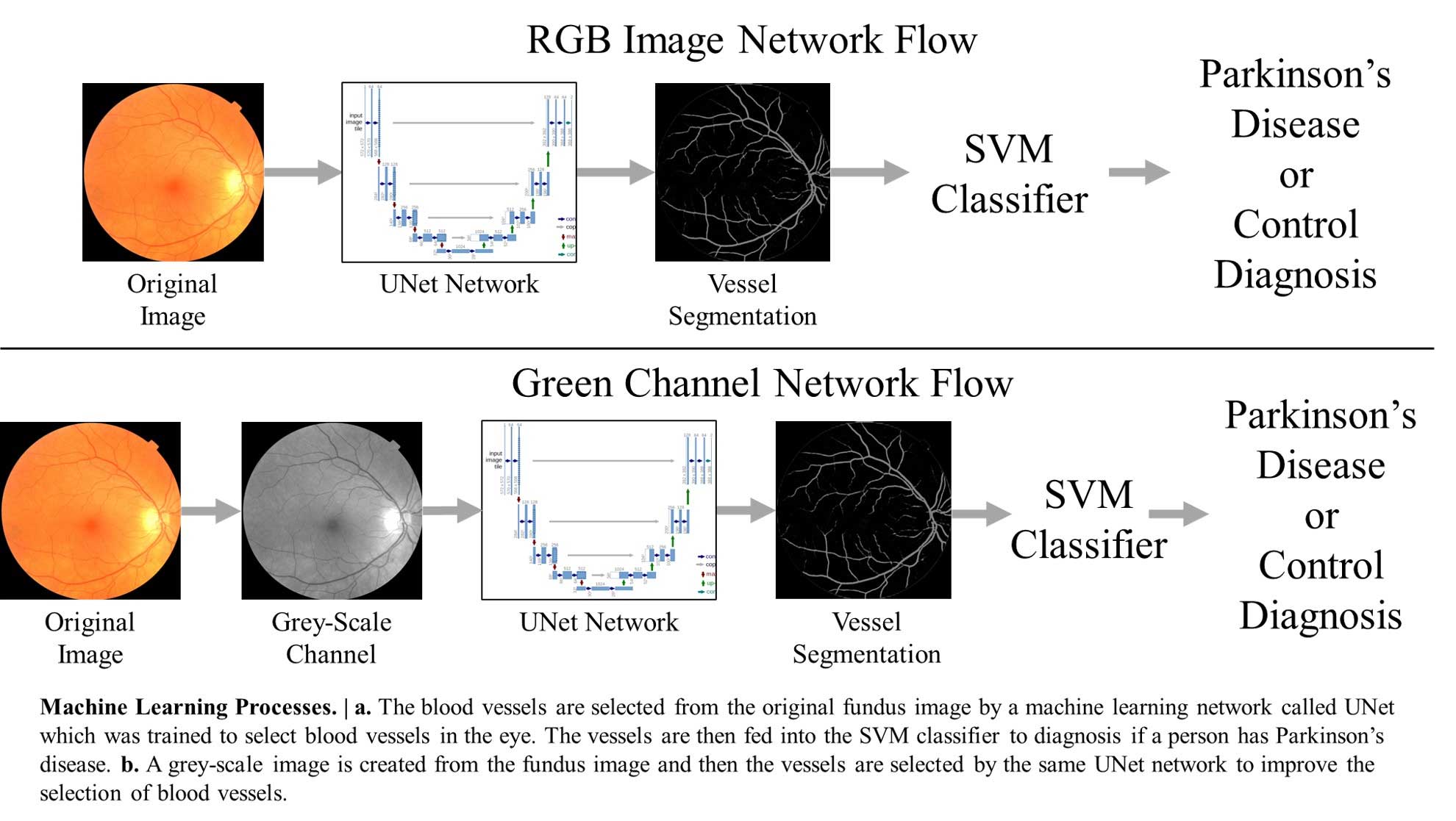 Blood vessels are selected from the original fundus image by a machine learning network. The vessels are then fed into the SVM classifier to diagnose whether a person has Parkinson’s disease.

“There were already a number of studies [showing] that the vasculature in the retina reflected the etiology, or disease in the brain,” said Ruogu Fang, director of the Smart Medical Informatics Learning and Evaluation Lab at the University of Florida, and senior researcher of this new study.

In Parkinson’s disease, neurons that produce the chemical dopamine, which is associated with motivation and involved in motion, die. People can experience movement problems earlier in disease that worsen over time, and may develop dementia in the advanced stages of disease. As Parkinson’s progresses, the blood vessels in the eye shrink, making these vessels a reasonable target for a marker of disease.

Fang and her research team used two datasets of retinal images of patients with and without Parkinson’s disease to see if certain machine learning networks could tease apart which patients had Parkinson’s and which patients did not based on the appearance of retinal blood vessels. The group used a neural network to pick out the blood vessels in the retinal images, and a second type of machine learning called support vector machines to determine whether or not the vessels show signs of Parkinson’s disease.

They also put these images through another step, increasing the contrast to see if that could make their networks even more accurate at figuring out which images showed signs of disease. Editing the images this way revealed more small blood vessels that appeared far fainter in the original images. 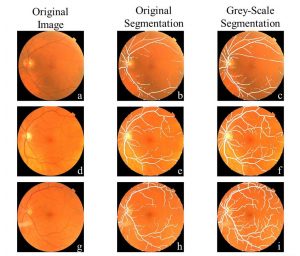 Comparison of Segmentation from input image to increase contrast of blood vessels.

When the researchers raised the contrast in the images and ran each dataset through the deep learning and different types of support vector machine networks, the most successful networks could identify which images came from Parkinson’s disease patients with over 70% accuracy.

“These are nice numbers for accuracy,” said Koronyo-Hamaoui, who was not involved in the study. “It’s a promising set of data,” but, she added, with the caveat that changes in blood vessels are common to other neurodegenerative diseases. To make a definitive diagnosis, a doctor would need to know more about what’s happening in the brain.

But Fang said that their next step is further testing this method and figuring out what specific characteristics of the blood vessels signify Parkinson’s disease.

This work is part of a broader effort among researchers to use the eye as a window into the brain. Koronyo-Hamaoui and her lab have also been working to develop noninvasive diagnostics using retinal imaging, but for Alzheimer’s disease, which is associated with a buildup of proteins called amyloid beta plaques in the brain.

Koronyo-Hamaoui’s most recent work, a small study published in the journal Alzheimer’s & Dementia: Diagnosis, Assessment & Disease Monitoring, showed that the more amyloid beta in a certain region of the retina, the smaller their hippocampus, a brain structure important for memory and heavily affected in Alzheimer’s disease. Death of cells in the hippocampus leads to memory issues, a common symptom of the disease. The amount of retinal plaques was also related to the patients’ cognitive symptoms. Patients with more retinal plaques had lower scores on assessments measuring cognitive domains like attention and memory.

Currently, no eye exam or retinal imaging method can be used to diagnose Alzheimer’s or Parkinson’s diseases, but many are being tested in patients. “Right now there are a lot of clinical trials,” Koronyo-Hamaoui said.

If and when retinal imaging methods are approved for diagnosis, it could allow clinicians to catch signs of disease earlier and expand access for people who can’t afford diagnosis with other expensive tests and brain scans. At the University of Florida Movement Disorders Center, for example, the researchers didn’t even need professional ophthalmologic equipment, let alone pricey brain scans. They used an iPhone with a special lens attachment to take pictures of the retina.

Koronyo-Hamaoui thinks the scientific community might be close to bringing eye-imaging diagnostic methods to the clinic, to the benefit of patients and healthcare providers. “It will be so much easier and so much more affordable,” she said.