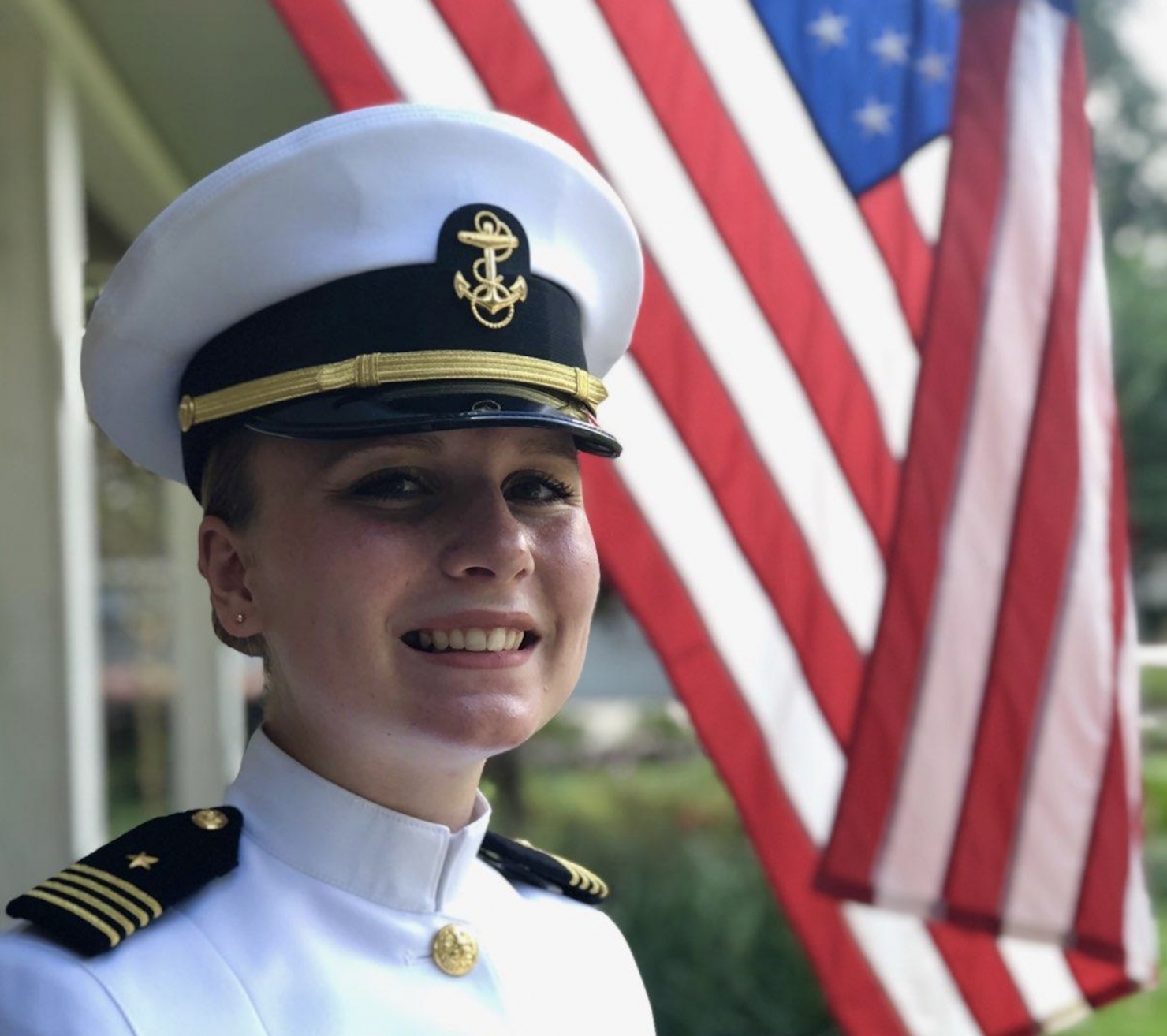 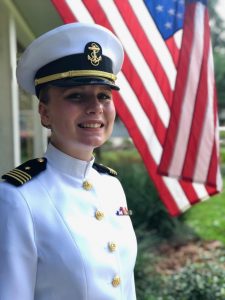 One of UF’s Gator Battalion Midshipmen has been selected as the 2019 Navy Federal Credit Union (NFCU) All American NAVY ROTC Student of the Year. Midshipman 1/C Jennifer Fillebrown competed against a national field of 58 other ROTC students and made the final 12. Now NFCU has named her the Navy/Marine winner from a field of four top-quality finalists from the Navy ROTC domain.

Fillebrown is a nuclear-screened midshipman, poised to join the country’s submarine force. She is also a UF engineering student with a major in aerospace engineering. Along with this prestigious honor, Midshipman Fillebrown won a $6500 scholarship for her continued education. Her efforts also won the unit (the Navy/Marine Student Association) a $5000 scholarship that will help ROTC Midshipmen travel to different leadership conferences and other events throughout the year.

Fillebrown took some time from studying for her fall final exams to answer some questions about what this award means to her.

Q: What was the basis of the competition for 2019 Navy Federal Credit Union All American NAVY ROTC Student of the Year?

A: I was selected by a UF Navy ROTC staff awards committee for an interview that included a review of awards I had received, my GPA, community involvement, etc. Based on the award committee’s recommendation, Captain Perrella, the Professor of Naval Science (PNS) endorsed my nomination and submitted my information to NFCU. There were 59 candidates from across the nation encompassing the three ROTC branches (Army, Air Force, and Navy-Marine). Four candidates from each of the three branches were selected for the "All-American Team," which was announced via social media in late October. One candidate was selected from each set of four to be the "ROTC Student of the Year." I was the person selected for the Navy-Marine domain.

Captain Sil Perrella, Professor of Naval Science and Commanding Officer of the UF Navy Reserve Officer Training Corps (NROTC) Unit reflected on her accomplishments, “It has been inspiring to watch Midshipman 1/C Fillebrown grow, learn and lead in UF’s Gator Battalion. I have had the pleasure of watching her excel academically, physically and in her leadership positions within the unit over my three years at UF. Being in position to witness Jenny’s unwavering drive in the pursuit of excellence, it comes to me as no surprise that she was NFCU’s Navy/Marine Pick for ‘ROTC Student of the Year’. We are so proud of her accomplishments and look forward to her joining the Fleet as a submarine officer after she graduates and commissions in May.”

Q: What do you think contributed to your win?

A: I believe my GPA probably set me apart (3.97 cumulative). I am sure that the awards I had received from the Mechanical & Aerospace Engineering department previously, the Albritton Scholarship and the John & Mittie Collins Scholarship, set me apart as well. My ongoing thesis work on Hypersonic/Rocket Trajectory Optimization also diversified my application.

General Albritton, who sponsors the Brigadier General James P. and Edythe P. Albritton Scholarship observed, “Pat and I met Midshipman Jennie Fillebrown when we presented her with our scholarship award. Conversations during the evening impressed us with her academic achievements and her dedication to serve in the Navy. We were not surprised when she won our scholarship the second time. She had earned it through her leadership in Navy ROTC and Mechanical & Aerospace Engineering. The Navy will receive her as an outstanding Commissioned Officer. I would have been proud to have her serve under my command.”

Dr. Anil Rao, Professor and Erich Farber Faculty Fellow in the Department of Mechanical & Aerospace Engineering, commented, “Jennifer has been fantastic to work with both as a student in my class (astrodynamics) and as an honors thesis student. Jennifer is one of the best students I have ever had in my 13+ years at the University of Florida. If I could, I would take Jennifer as a PhD student in my group in a heartbeat.” 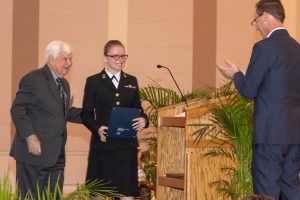 Photo of Jennifer and General Albritton taken at the April 4, 2019 Awards banquet where she was given the Brigadier General James P. & Edythe P. Albritton Scholarship award

Q: How does being a Mechanical & Aerospace Engineering student complement being a Navy ROTC student, and vice versa?

A: I think, at the most practical level, success in either role relies heavily on critical thinking and problem-solving skills. I strive for excellence in everything I do. I feel it is an important goal when lives are at stake, in war or in building airplanes. ROTC has invested much in developing each midshipman's ethical foundation, and a strong sense of ethical responsibility is very important in engineering. Finally, Navy ROTC and the Department of Mechanical & Aerospace Engineering have both given me opportunities to grow and develop my leadership and teamwork skills in a variety of applications, and those lessons are more valuable to me than any technical background in either area.

Dr. John Abbitt, senior lecturer in the Department of Mechanical & Aerospace Engineering (MAE), spoke of her academic accomplishments, “Jennifer is intelligent, focused, industrious, curious, interesting, friendly, versatile, sincere, principled, and humble. I have had her in two of my classes, and she has been an absolute delight! She and I have had many conversations where I couldn’t help but notice her considerable talents and instincts for high quality work. She is respected by her classmates who look to her for guidance. She will be a strong asset for the Navy, and I am sure she will make many great contributions to the service and her country.”

Q: What does it mean to be a “nuclear-screened Midshipman”?

A: This means I have signed a contract with the Navy, affirming I will pursue nuclear power training within the Navy. In my particular case, I will be going to submarines. To be offered the contract, I had to submit my transcripts so that I could be considered for an interview last December. I travelled to Naval Reactors in Washington DC, where submarines are designed, and went through two technical interviews with engineers who worked there. They mainly focused on physics and engineering questions that I had to work out on paper, but they could have asked me anything from any technical class on my transcripts. After passing a character interview with Admiral Caldwell, they offered me the contract.

Q: What are your plans after graduation?

A: The next five years are set: first, 18-24 months in the nuclear power training pipeline, then 36 months sea duty with a submarine. My engineering background will be very helpful in understanding the different systems within a submarine and a nuclear reactor. It will be critical to learn how to operate them safely in an inhospitable environment. I do not yet know if I want to pursue a career in the military, or in engineering in the civilian world. I only know that I want my work to be meaningful and to the benefit of my country and the world as a whole. There are many open doors; I could even follow in the footsteps of Kayla Barron, one of the first female submarine officers, who was just recently selected for NASA's astronaut candidate class (2017). I imagine my aerospace engineering degree could be very valuable there! I am definitely interested in coming back to UF to pursue a Master's degree to further my education or earn a Ph.D. in an aerospace area, if the opportunity comes up.

Q: What would you say to other Gator Engineering students about the benefits of participation in NAVY ROTC?

A: Nothing keeps the “freshman fifteen” (those 15 pounds many freshmen seem to gain during their first year of college) off like mandatory physical training. Many of the Navy and Marine Options in ROTC are filled by engineering students. From my very first week in the program, I had helpful mentorship from other engineering students who advised me on the resources available to me and on which classes to take. The Navy pays for tutors, who come in four times a week. They are very invested in the academic success of each midshipman. My tuition is paid for by the Navy; and my job after graduation is set, so I only have to worry about my education. In the summer, I have gotten to go to Navy training programs and travel around the world.

Midshipman Fillebrown and the two other winners, from the Army and Air Force domains, were announced live on the ESPN College Football Live show (4:30 p.m. ET) on December 12. The three students then travelled to Annapolis, Maryland, for a two-day celebration culminating in an on-field recognition event during the Military Bowl on December 27.