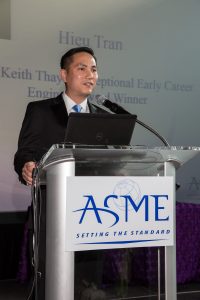 Established in 2007, this award is presented annually by ASME’s Petroleum Division to recognize an early career professional who displays outstanding dedication, effort and performance in his or her field.

Tran, who received his master’s in mechanical engineering from the University of Florida in 2007, was honored during ASME’s recognition event at the Offshore Technology Conference in Houston.

Tran started his engineering career after he graduated from the UF Herbert Wertheim College of Engineering’s Department of Mechanical & Aerospace Engineering. He worked for KBR and Jacobs before joining UniversallPegasus International as a senior project engineer.

ASME helps the global engineering community develop solutions to real world challenges. Founded in 1880 as the American Society of Mechanical Engineers, ASME is a not-for-profit professional organization that enables collaboration, knowledge sharing and skill development across all engineering disciplines, while promoting the vital role of the engineer in society. ASME codes and standards, publications, conferences, continuing education and professional development programs provide a foundation for advancing technical knowledge and a safer world.