GAINESVILLE, Fla. — Oysters thrive under brackish conditions, and now a University of Florida study reveals that the bivalves can actually help create the mix of fresh water and brine they crave.

While evaluating a new method of restoring degraded oyster reefs, researchers with UF’s Institute of Food and Agricultural Sciences and UF’s College of Engineering confirmed an observation that Cedar Key-area oystermen have made for years – some oyster reefs act as natural dams, impounding fresh water that flows seaward from nearby creeks and rivers. 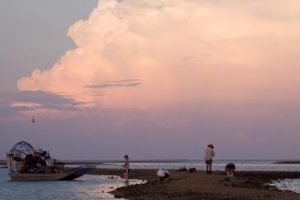 Researchers working on an oyster bar survey off of the coast of Cedar Key, Florida. (Photo courtesy UF/IFAS)

This finding, published in a report available at http://www.projects.tnc.org/coastal, could aid ecological and fishery restoration projects along Florida’s Big Bend Coast, a largely undeveloped area bordering the Gulf of Mexico between Wakulla and Pasco counties, said project leader Peter Frederick, a professor with UF/IFAS’ Department of Wildlife Ecology and Conservation.

The Big Bend Coast is one of the nation’s few coastal areas featuring numerous oyster reefs that run parallel to shore and stand above the water’s surface at low tide. The study site, off the Levy County coast, is a chain of oyster reefs punctuated by a few openings that allow seawater to mix with fresh water that the reef holds back as it empties into the Gulf of Mexico from the Suwannee River.

“We’ve known about other ecosystem services that oyster reefs provide, like acting as breakwaters that reduce the impact of wave action on the shore,” Frederick said. “But the role of oyster reefs in modulating the salinity of water near the shore had not been demonstrated before.”

The team investigated the area’s salinity levels after local oystermen told Frederick the reef held back fresh water. Frederick then made a simple test — while visiting the study site, he dipped his finger in the water on either side of a reef and tasted each sample. Though the reef was only 80 feet wide, it seemed that water from the near-shore side wasn’t as salty as water from the side facing the open sea.

In response, Frederick recruited David Kaplan, an assistant professor with the UF College of Engineering’s Department of Environmental Engineering Sciences. The pair checked salinity in multiple locations for 18 months and their findings confirmed the oystermen’s observation – on average, the salt content of water on the near-shore side was nearly 20 percent lower than it was on the ocean side, and up to 90 percent lower on some days at some locations. Furthermore, computer modeling showed that if restoration increased the elevation of the degraded reef to expected levels, the reef would probably hold much more fresh water near the shore.

“As people become more focused on how to build and maintain resilient coastal communities, I think we’ll look more at natural systems, to see how they work and how we can replicate their effects,” Kaplan said.

The bags, weighing up to 300 pounds, are expected to remain in place long enough to provide suitable habitat for tiny, free-floating oyster larvae to settle and grow, rebuilding the reef, she said.

Initial results showed that young oysters were colonizing the mesh bags at impressive rates, said Sturmer, who’s also a leader of the UF/IFAS Shellfish Aquaculture Research and Extension Program based at Cedar Key.

Within 18 months, oyster densities on the UF restoration sites were higher than the densities found at most other restored oyster reefs in the Gulf of Mexico. The UF control sites showed no improvement, indicating that the lime rock and bags of clam shells made the difference.

The reef’s long-term response is potentially more important, Frederick said, because scientists believe that successfully restored sites will be more resilient to environmental change and weather events. Monitoring efforts over the next 10 to 15 years will establish whether reefs at the study site will thrive and grow.

One piece of early evidence supporting the ecological value of restoration is that the restored reef sites attracted more birds than control sites – 62 percent more birds overall, and up to 500 percent more for some species, including the bald eagle.

Support for the project was provided by a four-year $77,000 grant from The Nature Conservancy Florida and the National Oceanic and Atmospheric Administration as part of a program supporting shellfish restoration efforts nationwide, and separate grants from the Florida Sea Grant program and the National Fish and Wildlife Foundation. Government agencies and local business associations including the Cedar Key Aquaculture Association assisted as well.

The study was one of the first projects conducted under the auspices of the Nature Coast Biological Station, a new UF/IFAS facility for observation and research along the Gulf of Mexico.