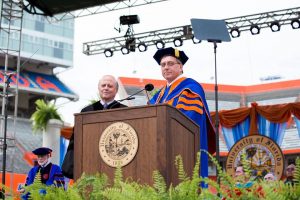 The Herbert Wertheim College of Engineering congratulates Dr. Walden “Wally” Rhines, an iconic figure in the electronics industry and a torchbearer of his family’s legacy on the University of Florida campus. Rhines received an honorary doctorate degree of technology from UF – its highest honor – in a ceremony last weekend.

Rhines is the chairman and CEO of Mentor Graphics, a leading supplier of products and services used by companies worldwide to design the electronic content of their products. The company has nearly quadrupled its revenue during his tenure. Prior to Mentor, Rhines was at Texas Instruments for 21 years, where he served as executive vice president of the company’s semiconductor group. During that time he led groundbreaking efforts in digital signal processing efforts, adding the functionality to microelectronic chips that has led to features such as voice recognition on today’s smart phones. He is also the co-inventor of the GaN blue-violet light emitting diode, which is integral to the functionality of DVD players and to the evolution of low energy lighting.

“I can think of no one who has had a greater impact on the world of electronic design automation than Dr. Rhines,” said Cammy Abernathy, dean of the Herbert Wertheim College of Engineering. “Both in his role as a corporate leader of major companies such as Texas Instruments and Mentor Graphics, and in his role as an outstanding citizen who has selflessly provided his time, talent and financial resources to a host of educational institutions, including the University of Florida.”

Wally grew up in Gainesville as the son of Frederick Nims Rhines, who launched first the program, then the department of materials science and engineering at UF. He served as the department’s first chair, and Rhines Hall was named in his honor. Following in his father’s footsteps, Wally Rhines earned a Bachelor of Science degree in metallurgical engineering from the University of Michigan, and a Master of Science and Ph.D. in materials science and engineering from Stanford University. He earned an MBA from Southern Methodist University and has an Honorary Doctor of Technology degree from Nottingham Trent University.

“The University of Florida has always felt like home to me,” said Rhines. “I grew up on this campus, this is where my education truly began. It is a privilege to be awarded with this honorary doctorate.”

Rhines lives in Portland, Oregon and serves on the West Coast Advisory Board for the college, which informs and helps shape strategic priorities with unique industry perspective.

“When I became chair of the MSE department in 2002, I reached out to Wally and we began a very wonderful friendship,” said Kevin S. Jones, who was awarded the Fredrick N. Rhines Professorship in Materials Science and Engineering. “He loves the University of Florida and is the department’s strongest supporter.”

“Wally Rhines has been a role model in providing the enabling technologies for world-changing innovations in microelectronics,” said Simon Philpot, professor and former chair of UF Department of Materials Science and Engineering.