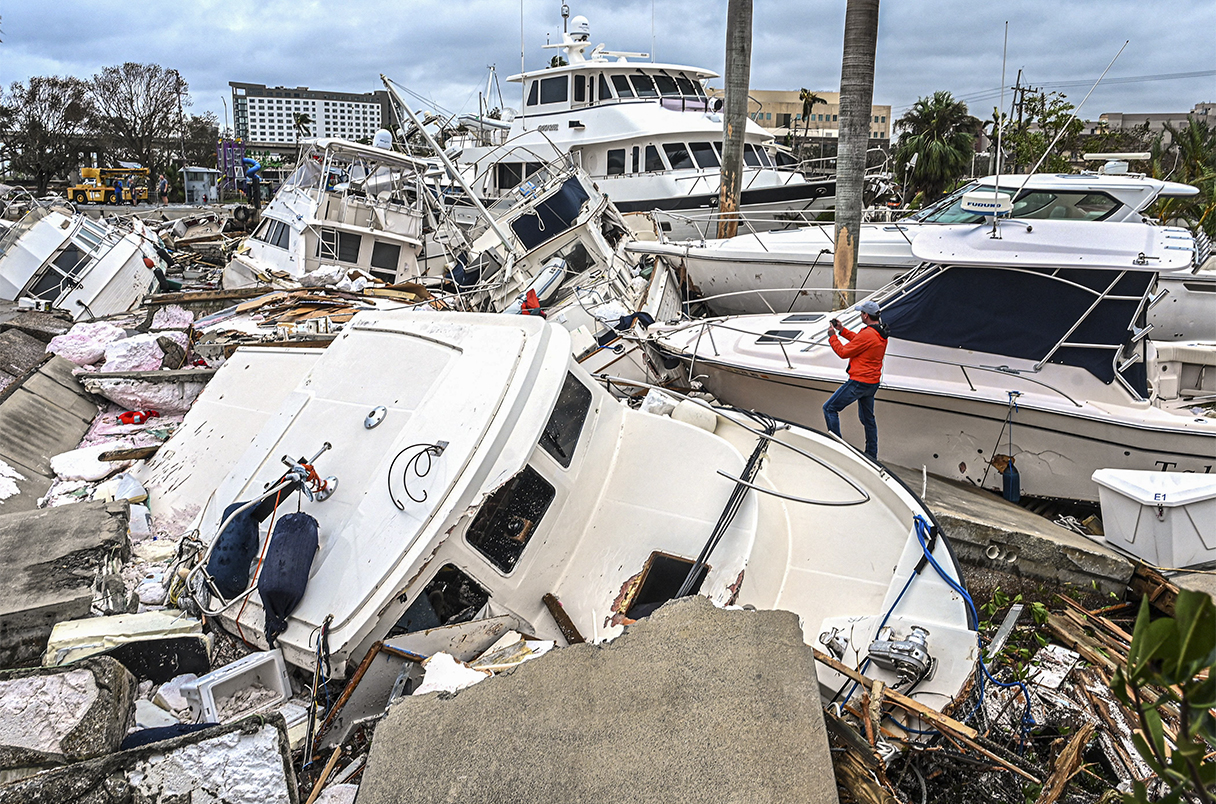 Forrest Masters, a civil engineer from the University of Florida (UF), spent much of Wednesday hunkered down at the Punta Gorda Airport near Fort Myers, Florida, as 185-kilometer-per-hour winds from Hurricane Ian lashed the building—and nearby instruments collected data.

At the same time, marine ecologist Eric Milbrandt was sitting in a hotel across the state in West Palm Beach, watching news reports and worrying about the fate of his marine laboratory on Sanibel Island, a barrier island near Fort Myers that was in the direct path of the storm.

For scientists, Hurricane Ian, which roared onto Florida’s southwest coast on Wednesday as a Category 4 storm with winds of 250 kilometers per hour, has been both a research opportunity and an ordeal. The winds cut power for more than 2.5 million and caused extensive damage, and floodwaters swamped communities. President Joe Biden on Thursday warned of “early reports of what may be substantial loss of life.”

For some like Masters, the storm was an object of study, promising insights into everything from the adequacy of building codes to the fate of sand dunes during storms. Milbrandt and others, meanwhile, have been forced to flee and are now worried about their homes, experiments, and laboratories.

“I don’t know the condition of my house or my parents’ house, whether it’s livable,” Milbrandt told ScienceInsider yesterday. He directs the lab for the Sanibel-Captiva Conservation Foundation, a nonprofit that studies environmental conditions along the coast of southwestern Florida. “The access to the island is going to be quite difficult for the next several months, I would imagine.”

Florida Governor Ron DeSantis on Thursday described the storm surge on Sanibel Island as “biblical.” But Milbrandt was confident that most of the foundation’s lab—built in 2018—was likely above floodwaters and had withstood the gale. The bridge connecting the island to the mainland is a different story. Images show a gap in the causeway and wreckage from the road lying in the water. The foundation’s network of water quality sensors is another apparent casualty. Just one of five sensors deployed in nearby waters was still reporting measurements Thursday. A buoy stationed offshore recorded 4.5-meter waves and powerful currents on Wednesday. Then it moved 1.6 kilometers from its usual location before going silent. “We think it either sank or got buried,” Milbrandt says.

At the Mote Marine Laboratory & Aquarium, based in Sarasota, 100 kilometers to the north, the scale of the damage was still unclear Thursday evening. The lab announced Monday that it was closing. “Staff members are focusing on protecting themselves and personal property, checking in on loved ones, dealing with power outages, etc.,” spokesperson Stephannie Kettle wrote in an email Thursday. “I will update you when it is safe to do so.”

Damage at one Mote laboratory dedicated to coral research was “not too bad” postdoctoral scientist Sara Williams reported on Twitter Thursday afternoon. “We were lucky,” she wrote.

The effects rippled out hundreds of kilometers from the hurricane’s eye, which crossed the coast near Fort Myers. In St. Petersburg, scientists at Eckerd College scrambled to ship frozen biological samples to a private facility away from the coast. Some experiments, however, couldn’t be saved. Amy Siuda, a biological oceanographer at Eckerd, had been planning to study the growth rates of pelagic sargassum, a kind of floating seaweed that has exploded in parts of the Caribbean. In the past month, she had driven across the state to collect samples and was rearing them in a greenhouse in 210 jars with varying temperatures and salinity levels. On Monday, as the college closed its campus, she pulled the plug on the chillers and heaters controlling the temperatures. “It’s really disheartening,” Siuda says.

For others the hurricane brought new data. As the storm approached, Masters drove from the UF campus in Gainesville toward the storm with six vehicles loaded with 20 tons of equipment. The goal: “To collect measurements in the areas that are going to be the hardest hit,” a bleary Masters said on Thursday, after returning home from several days with little sleep.

His team tried to erect sensor-laden towers on a barrier island near Fort Myers to measure wind and floodwaters but could not anchor the towers securely in the sand. They did raise two other towers in the Punta Gorda area to measure winds close to the land surface. Soon after installing a final tower at the local airport, Masters and his team sought shelter at a reinforced building nearby, where they rode out the storm.

The data collected by the sensors could help scientists better understand the wind conditions and how well buildings withstood them. After studying 40 storms over 20 years, Masters has seen a common pattern. Buildings suffer damage at slower wind speeds than they are supposed to withstand. “This has been a longtime problem,” he said.

Now, as recovery begins, other scientists are getting on the road to study the damage. On Thursday, engineers driving cars equipped with camera systems much like those used to capture images for Google Maps headed toward southwestern Florida. There, they will gather footage as the first stage of a detailed investigation of damaged buildings. The work is run by a project funded by the National Science Foundation to swiftly examine the causes behind infrastructure damage from natural disasters.

Already, the researchers have identified places to visit at the center of the storm damage that aren’t flooded and contain a mix of different buildings. Later, they will visit individual buildings to study them more closely. Events like Ian offer a “very good stress test” for buildings, says Tracy Kijewski-Correa, director of the program and a civil engineer at the University of Notre Dame.

The weather is also stress-testing natural systems, including sand dunes along the shoreline. Earlier this year, a team led by Christine Angelini, a UF coastal ecologist, planted experimental dunes near Jacksonville on Florida’s northeast coast with more than 10,000 clumps of grasses. The goal was to understand how vegetation influences the fate of dunes during storms.

Angelini suspects the fledgling project might have been wiped out by storm surge. But besides planting the experimental dunes, Angelini has compiled a detailed map of dunes along this part of the coast. She now hopes that documenting how they fared during Ian will shed light on what makes some dunes strong and others weak. “We’re really hopeful that we’re going to get some interesting data,” she says. “It’s a wonderful opportunity.”

A few states to the north, other scientists are waiting. After traveling across Florida, Ian is expected to deliver hurricane-force winds to the South Carolina coast today.