Samantha Colombo and Adam Clarke are heading for careers as United States Air Force pilots after they finish their final year at the Herbert Wertheim College of Engineering. 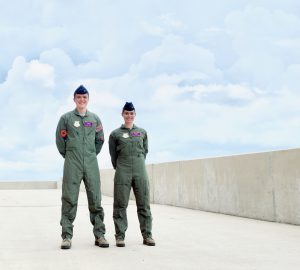 Are they excited? Yes, they are!

Are they committed to their careers? Absolutely!

Do they feel prepared? Without a doubt!

You may well ask, “Why so much enthusiasm?”

Engineering Runs in the Family

Colombo comes from a military family (both parents are Air Force officers) and has lived many places, but she calls Gainesville home for now.

“I wanted to continue my education in an atmosphere similar to the one I grew up in, so I signed up for ROTC while still in high school,” she said. “My father was a pilot and an aerospace engineer, so I felt that was a good place to start. I always liked math, but I didn’t want to get a straight mathematics degree. Mechanical engineering was the right choice for me.”

Clarke was born and raised in Wellington, Florida. When he was growing up, his mother was a computer scientist at Pratt & Whitney, a leading manufacturer of aircraft engines; and he got his love of aerospace from her. The third-generation Gator came to UF to get his degree in aerospace engineering.

“I joined ROTC in my freshman year, because I knew even then I wanted to be a pilot,” he said.

Samantha Colombo (L) and Adam Clarke (R) are heading for careers as United States Air Force pilots after they finish their final year at the Herbert Wertheim College of Engineering.

These two students with different backgrounds met the first week of college in the Department of Mechanical and Aerospace Engineering and became fast friends. As part of the Air Force ROTC, they enjoyed the camaraderie of a self-motivated, committed group of people who helped them grow, find direction and assume leadership roles that would prepare them for their future as pilots.

Clarke says ROTC taught him a lot about how to be a good leader.

“Giving positive feedback is actually something we work on a lot so that the cadets understand that feedback is not just a negative criticism.” Colombo added, “Feedback is given with the intent of improving a person. Today, I look back on myself and how much I’ve grown since my freshman year, and I think that growth comes from all the feedback we received.”

At the end of their sophomore year, Colombo and Clarke underwent a 23-day field training exercise, where they experienced stressful, high-pressure situations.

Colombo said, “I have always been a people person, but learning how to handle myself in a crisis and other stressful, difficult situations, that is where most of my growth has come from. It is what helps make us leaders.”

Colombo will be taking classes presented by the Engineering Leadership Institute this year to further hone her leadership skills.

Another area of growth is decision-making – important to an engineer as well as a pilot.

“Bigger-picture decision making is something you don’t really get as an undergraduate student,” Colombo said. “ROTC gives you the chance to do that.”

As commander (Colombo) and vice-commander (Clarke) of Detachment 150 on the UF campus in 2017, both Colombo and Clarke had to make decisions affecting 120 other cadets.

“Being a leader taught us to rely on others when making decisions and emphasized the value of teamwork,” Clarke said.

When asked what they would say to engineering freshmen about ROTC, both cadets gave strong reasons to try it.

Colombo said, “People think it’s all about physical fitness, but it’s more than just that. It is the general feeling of belonging to a community, plus all the helpful people and how much you grow as a person.”

Clarke contributed, “By the end of my first year, I had made close friendships with other cadets and realized what an outstanding opportunity ROTC was to improve myself as a person and as an engineer.”