The University of Florida’s Department of Materials Science and Engineering continues to benefit from the Rhines family since the founding of the department by Professor Fred Rhines 59 years ago. Dr. Walden “Wally” C. Rhines, son of Fred Rhines, has made a gift of $1 million to the department to establish the Rhines Rising Star Professorships.

The Rhines Rising Star initiative will fund two assistant professorships that will be awarded to selected early career faculty who are already demonstrating distinguished performance in research and teaching.

Wally Rhines is the chairman and chief executive officer of Mentor, a Siemens Business, a leader in worldwide electronic design automation used by companies worldwide. Prior to his time at Mentor, he spent 21 years at Texas Instruments, where he was the executive vice president and led the company’s groundbreaking efforts in digital signal processing.

His father, Fred Rhines founded the department on the talents and promise of early career faculty with the philosophy that outstanding people want to work with other outstanding people. This gift, says Wally, will continue to honor his father’s legacy to support assistant professors of this caliber.

DeHoff and Hench were both early in their careers when Fred Rhines hired them. Hench joined the department in 1964 and invented Bioglass, the first man-made material to bond with living tissues and is now used to repair bones, joints and teeth.  DeHoff joined the department during its founding year in 1959 and was Rhines’ final Ph.D. student at Carnegie-Mellon University. DeHoff became an expert in thermodynamics, writing the first and second editions of Thermodynamics of Materials Science.

“They helped attract more faculty and students like them,” Wally Rhines said, “eventually, taking the department to a top-ranked position. (And now) I think the dean has done a terrific job in providing momentum to grow the engineering college, and I want MSE to be a part of that growth,” Rhines said.

As the department continues to be a source of pride for the Rhines family, identifying ways to support and ensure its continued success is key, says Wally. The gift is therefore made to help accelerate the growth and energy of the department, he believes.

“Endowed professorships carry a level of prestige that positively reflects on our faculty and their research,” Rhines said.

“The Rhines family is an important part of the department’s past and future, and we are grateful for their continued support” said Michele Manuel, Chair for the Department of Materials Science and Engineering. “Wally understands the impact of having endowed professorships for faculty as a way of showing our support and confidence in the groundbreaking research and teaching that faculty are contributing within the department and college.”

“The Rhines family is an important part of the department’s past and future, and we are grateful for their continued support."Dr. Michele Manuel, Chair, UF Department of Materials Science & Engineering 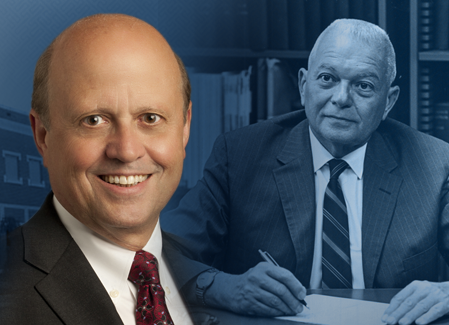 Wally Rhines (above, left) was 12 years old when his family moved to Gainesville. His father, Fred Rhines (above, right), left his endowed professorship at Carnegie Mellon University, then the Carnegie Institute of Technology, with a dream of starting a metallurgy program at UF.

Wally Rhines grew up on UF’s campus. One of his fondest memories was during the university’s engineering fair, where each department would put forth a demonstration, including the soon-to-be materials science and engineering department.

Fred Rhines had just acquired a tensile tester, so they brought it to the fair and asked people for a piece of their hair to test its strength. They called it a hair pulling contest.

Wally said the demonstration was a hit. “People really liked it.”

While Wally didn’t attend the University of Florida, he has a long, historical connection to the university and the department because of his family.

In addition, he also holds an MBA from Southern Methodist University, and he received Honorary Doctor of Technology degrees from the University of Florida in 2016 and Nottingham Trent University in 1998. 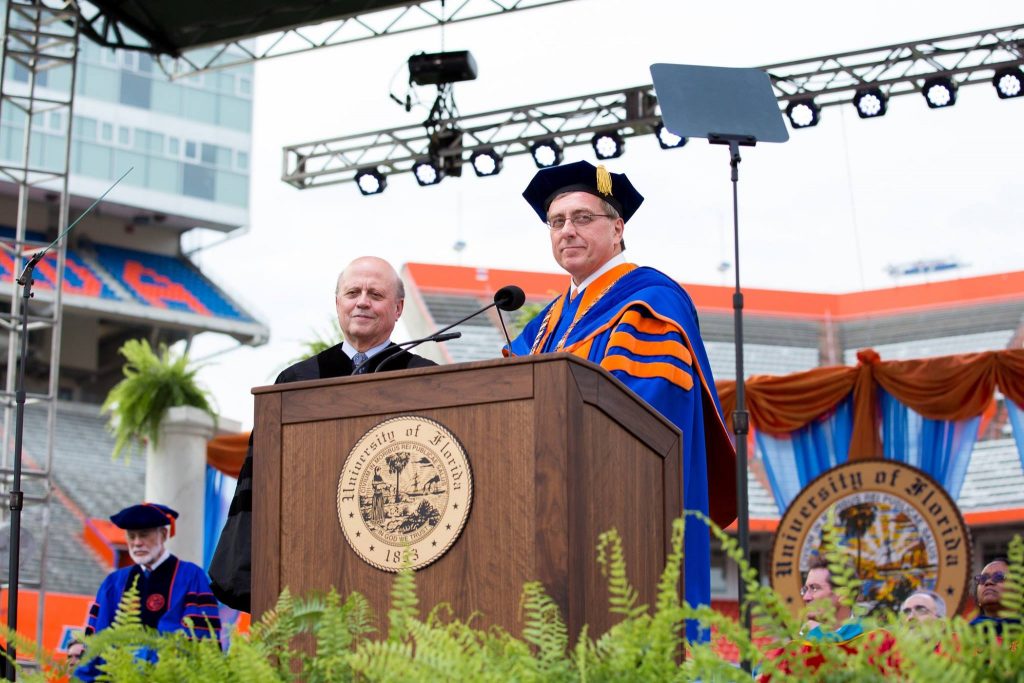