The National Science Foundation (NSF) has awarded $1.4 million to the University of Florida for a collaborative project to optimize operation of undersea robots (ROVs) for offshore industries and workers.

The Future of Work at the Human-Technology Frontier (FW-HTF) research project will reconceptualize the subsea industry by advancing knowledge of underwater Human-Robot Interaction (HRI) in under-explored workplaces, creating a novel interface for remote operation of undersea robots and customizing them to the needs of offshore industries and workers, impacting worker productivity, training and quality of life in remote undersea inspection and construction tasks.

Led by Eric Jing Du, Ph.D., a civil associate professor within the Engineering School of Sustainable Infrastructure and Environment (ESSIE), the project leverages the combined research of an interdisciplinary team within the University of Florida including co-principal investigators Xiao Yu, Ph.D., civil assistant professor in ESSIE, Jonathan Adams, Ph.D., assistant professor in the Department of Economics, and Kent Crippen, Ph.D., professor in the College of Education. The research team received support from external collaborators from the American Bureau of Shipping and eight subsea robot companies in the U.S. and Australia. 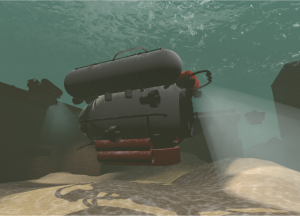 “The goal is human-robot ‘sensory transfer,’ that is, a seamless translation of perceptions and actions between the operator and the robot,” Dr. Du said. “The novel interface integrates robot sensor readings and high-speed predictive simulations of hydrodynamic forces to create an immersive mixed-reality display. In addition to augmented video images of the robot’s surroundings, the interface converts measurements of water flow rates, hydrostatic pressure, ambient temperature and other variables into tactile sensations for the operator. Likewise, the interface will render natural movements of the operator’s body into control commands to the robot.”

The project hopes to reduce the extensive training currently required for operators, thereby increasing access to these jobs while reducing industry training expenses and downtime due to personnel shortages. With a shrinking workforce impacted by the pandemic, expanding economic opportunity to broad sections of society through enhancing the capacity to recruit workers from adjacent fields is crucial. By requiring a diverse set of subjects for the FW-HTF, the investigators aim to illustrate how these human-robot interfaces can translate to other sectors, such as construction.

Dr. Du explained “Many engineering jobs, such as construction, are still skewed toward a male workforce. This human-robot interaction approach can enhance accessibility and inclusion by allowing underrepresented groups to feel more welcomed, working in a safer environment governed by the new virtual telepresence technology.”

The project proposes that this sensory augmentation method for robotic control will also promote career longevity by mitigating the age requirement – a restriction based on the mental and physical load in certain tasks — and will help salvage the careers of experienced workers who have suffered from career injuries.

Offshore applications that would directly benefit from the research include subsea infrastructure inspection, geological surveys, marine habitat monitoring, pollution assessments, ship-hull inspections, unexploded ordnance surveys, contraband detection, aquaculture monitoring, search and rescue, and archaeological exploration and surveys. The impact of this novel interface could be profound as changes in climate and corresponding rising sea levels will place increasing demands on offshore operations to protect and repair coastal damage. Similarly, the emerging need for sustainable offshore energy infrastructure such as wind, wave or tidal generators will increase the demand for undersea inspection, construction, and maintenance.

The project, which includes the University of Hawaii and the University of Tennessee in the $2 million grant total, will also examine adult-learning needs of workforce transformation to the subsea industry, establishing academia-industry-government partnerships for improving performance, safety, and societal outcomes of subsea works. It will integrate techniques from psychometric and behavioral sciences as well as engineering and human factors.

“The new technologies that are developed from this project are not intended to replace people or the need for human expertise, but to accentuate what humans do well and can accomplish when working seamlessly and synergistically with robotics, which will make employment and future careers more accessible and rewarding,” Dr. Crippen said.