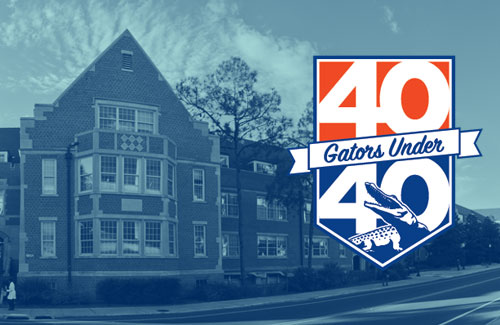 Four Herbert Wertheim College of Engineering alumni have been recognized by the university in this year’s “40 under 40” awards, which honor outstanding young alumni whose achievements positively impact The Gator Nation® as they go greater in their communities and professions. Even though 2020 was a challenging year medically, economically and socially, these Gator engineers moved forward in their chosen fields.

Shitarria Battle (BSME ’10) is the Chief Engineer for the Command and Control, Battle Management and Communications (C2BMC) Systems Development branch within the Missile Defense Agency, a section of the U.S. Department of Defense located in Huntsville, Alabama. She executes a $330M program, where she provides technical direction to over 100 military, government and civilian contractors dispersed in four states.

Ms. Battle is responsible for the design, development, integration, testing, and fielding of new C2BMC Software, which is a vital operational system that enables the U.S. president, secretary of defense and combatant commanders at strategic, regional and operational levels to plan ballistic missile defense operations, and to dynamically manage designated networked sensors and weapons systems to achieve global and regional mission objectives. Ms. Battle led the program office’s transition to Agile Software Development in 2019. Her efforts aided in the establishment of an end-to-end test environment to provide early and continuous feedback to development.

In her free time, Ms. Battle serves as an engineering mentor with the Auburn University Samuel Ginn College of Engineering 100+ Women Strong organization, and she volunteers on behalf of the Missile Defense Agency at various Science, Technology, Engineering and Mathematics (STEM) events. Ms. Battle is also active within the local community, where she volunteers at the Downtown Rescue Mission, serving weekly meals to over 200 residents. In addition, Ms. Battle is an active member of the Junior League of Huntsville, where she volunteers with local women leaders to improve the Huntsville/Madison community through fundraising, advocacy and community programming.

In recognition of her accomplishments, Ms. Battle was the 2020 Women of Color Magazine “Managerial Leadership in Government” award recipient.

After completing his undergraduate studies, Dr. Blazeck attained a Ph.D. in Chemical Engineering from the University of Texas at Austin, performing research with Dr. Hal Alper to engineer microbial hosts to produce biofuels. He continued his research career as a Postdoctoral Fellow at UT Austin, working with Dr. George Georgiou to engineer a cancer-fighting enzyme, which will soon be tested in clinical trials.

Dr. Blazeck is now a new Professor of Chemical Engineering at the Georgia Institute of Technology, where he teaches Chemical Engineering courses and leads a laboratory of 14 graduate and undergraduate students. His laboratory’s current work aims to understand the complex interplay between metabolism and immune function in human cancers to be able to design new therapies.

Dr. Blazeck’s work has resulted in 15 publications and five patents. He has been recognized nationally with several prestigious awards and honors, including an American Cancer Society Fellowship; a National Merit Scholarship; and more recently, an Arnold and Mabel Beckman Foundation Beckman Young Investigator Award, a yearly honor given to promising new professors in the biological and chemical sciences.

Dr. Blazeck now lives in Atlanta with his wife Kristina, and their three young children.

Jamal Lewis (Ph.D. BME ’12) is an Assistant Professor in Biomedical Engineering at the University of California, Davis. Dr. Lewis’ Immuno-modulatory Biomaterials Laboratory focuses on the development of biomaterial systems that can manipulate the immune system. The group aims to design the next generation of immunotherapeutics for applications in immune-related diseases. This multidisciplinary work incorporates aspects of biomaterials engineering, drug delivery and immunology.

Prior to his professorship, Dr. Lewis was Senior Scientist at OneVax, LLC, a pre-clinical biotechnology company located in Alachua, Florida, that harnesses the intellectual and research advances of University of Florida faculty for applications in the advancement of human health, specifically Type 1 diabetes.

Chelsea Magin (BSMSE’06, MSBME ’08, Ph.D. BME ’10) is an Assistant Professor of Bioengineering, Pediatrics and Medicine at the University of Colorado Denver- Anschutz and the Principal Investigator of the Bio-inspired Pulmonary Engineering Laboratory. Her team invents biomaterials and engineers models that recreate the micro-architecture of lung tissue to better understand the mechanisms underlying chronic pulmonary diseases and discover new treatments. Dr. Magin’s work is funded by the National Institutes of Health, the National Science Foundation, and the Department of Defense.

Dr. Magin has extensive experience in the conception, development and translation of medical devices into commercial products. As the Director of Product Development for Sharklet Technologies, Inc., she led a research and development team that designed medical devices to control biological adhesion.

At home in Denver, Dr. Magin is a Rocky Mountain Gator Club member, an avid cyclist, and loves to throw pottery in her spare time.