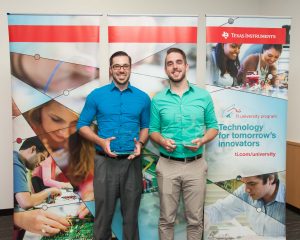 Four teams of UF students placed in the Top 10 of the 2015 Texas Instruments Innovation Challenge last weekend. Two of them landed first and third place.

With their project Seven Deadly Synths: A non-contact synthesizer, recent electrical engineering graduates Troy Bryan and Sean Lyons won the overall competition. Inspired by the early analog synthesizers of the 1960s and 70s, Bryant and Lyons created a synthesizer instrument that can be used by musicians of all skill levels. The device specifically allows disabled musicians to create sounds using simple movements, like the wave of a hand.

“Troy and I have known each other since high school where we both played music together. In college, we both chose electrical engineering, so we’ve gotten to be great friends,” said Lyons. “At UF, another of our friends enjoys playing guitar, but he struggles with his motor skills because of early onset arthritis. When it came time to decide on a senior design project, this concept was right at that intersection of our interests and something we really cared about.”

Since their senior design project used 35 TI components in its build design –including a real-time MCU, eight power management solutions and 26 signal chain products – the students were encouraged by faculty advisors to enter the TI competition. Winning was a pleasant surprise. 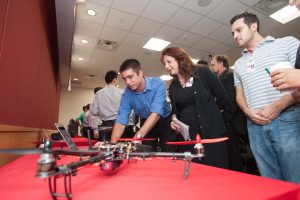 The competition included more than 300 teams from accredited engineering colleges and universities across the United States, Canada and Mexico. Projects were judged by their use of engineering practices and are judged on criteria such as originality and creativity of the application, complexity and quality of the design, and effective use of TI technology.