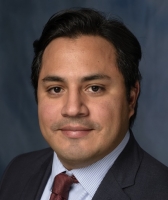 Dr. Daniel Martinez-Ramirez received his M.D. from the Universidad Autonoma de Nuevo Leon in 2005. He completed an internal medicine internship at the Benemerita Universidad Autonoma de Puebla and Neurology residency at the Tec de Monterrey in 2012. Following residency, he was trained in the Movement Disorders Clinic at the Instituto Nacional de Neurologia y Neurocirugia in Mexico City for one year, and in the University of Florida Center for Movement Disorders and Neurorestoration for an additional two years. Dr. Martinez has over 65 published articles, book/chapters, and meeting presentations. He is currently a Research Professor at the University of Florida with interest in motor and non-motor aspects of Parkinson’s disease and other movement disorders and he is also an expert in medical and surgical treatments of Parkinson’s disease. He is the author of the Spanish version of Parkinson’s Treatment: 10 Secrets to a Happier Life.